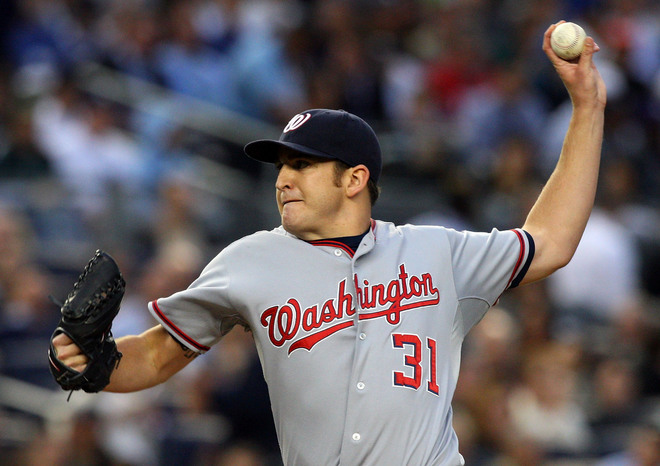 It still doesn’t make much sense, but at least now folks are acknowledging it.

The rumor – which suggested that the Cubs had checked in with the Nationals on lefty John Lannan – has been shot down by a Cubs source, which was to be expected, not only because that tends to be how these things play out, but also because it was hard to figure out why the Cubs would want to take on Lannan in the first place. From the Tribune:

A highly placed source with theNationals denied a report the club has spoken with the Cubs about acquiring Marlon Byrd in a deal for left-handed starter John Lannan. The Nationals have top prospect Bryce Harper waiting in the wings to take over in center field and aren’t interested in Byrd.

The source said they are not actively shopping Lannan, who was demoted to Triple A. The Cubs also are not willing to take on Lannan’s $5 million salary to be a middle reliever and have enough starting depth at Triple-A Iowa.

Though that denial has a few holes – it denies that the Cubs specifically spoke to the Nationals about a Byrd for Lannan swap, but technically doesn’t rule out conversations about Byrd or Lannan, individually, or about other players – it strikes me as pretty credible, given how odd the fit seemed in the first place.

Well, like I said when the rumor first surfaced, I tend to think that the Cubs checked in with the Nationals after Lannan was demoted. Like many other teams probably did, the Cubs were just checking to see how desperate the Nationals were. That kind of pulse-checking is worth doing, but it rarely leads to a deal.

Interestingly, it sounds like there was a possibility that the Cubs were interested in adding Lannan as another lefty to the bullpen, but only if the Nationals ate some of his salary. Given that Lannan still could have value to a number of clubs as a back-of-the-rotation lefty (including the Nats if they suffer an injury), you can understand the Nats’ reluctance to kick in cash just to move him.