Dale Sveum isn't Worried about Marlon Byrd, Except He Kind of is and Other Bullets Skip to content 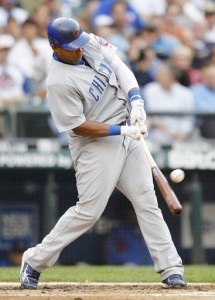 I’m headed to Chicago this morning, and will be at The Sports Corner at some point in the late morning (stuffing my face, most likely, in my blue Bleacher Nation shirt, if you’re looking for me), before going to today’s game. Posting should be normal today, but the Enhanced Box Score is going to be delayed. Delayed, and extra squiggly depending on how many Old Styles I have.