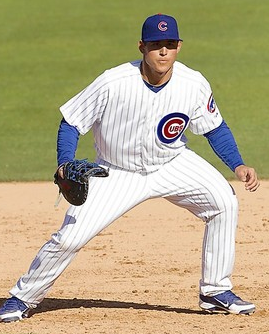 The goal of any farm system is to produce players for the major leagues. Player promotions, whether from Iowa to Chicago or from Peoria to Daytona, are a routine and necessary transaction in any farm system. The middle of May is when player movement often begins, and that date is fast approaching. There is a lot of baseball to be played in the near future, but already a few candidates for early promotion are emerging at all levels of the farm system. Tracking these trends will be an ongoing story over the next couple of weeks.

Rusin only collected one strikeout in Thursday’s game, but he still got the win by keeping the Isotopes off the bases. Only eight men reached in Rusin’s seven innings of work. Any time an Iowa starter can hold his opponents to just two runs, the Cubs’ Triple A club is going to have a very good chance of winning.

Dave Sappelt drove in three runs on a base hit and a solo home run. Ty Wright and Josh Vitters each added a double to the cause as Iowa collected 14 hits and left only seven on base.

Anthony Rizzo added more fuel the call-up fire with his three hit performance. On the one hand, the Cubs can keep him in the minors until July and try to give themselves an extra year of control. On the other hand, Rizzo’s bat and glove would both be welcome on a major league team that has trouble scoring runs and has lost some close games. The Cubs do not want to rush their leading first base prospect, but like Brett Jackson and Josh Vitters, he is looking very comfortable in Triple A. If that continue into late May and early June, the Cubs may find themselves with a roster full of interesting decisions.

AA – Tennesse Smokies. 4 – 4
Dallas Beeler gave up just three hits in six innings of work, but the Tennessee batters could not put together enough runs for the win. The Smokies lost this game 4-1.

Once again, the starting pitcher did not amass flashy strikeout numbers; he just kept the other team off the bases. This has been the hallmark of a number of games across the farm system this season, and it could be interpreted two ways. It could be that the Cub pitchers are just not good enough to consistently strike batters out, or it could be that the new Cubs’ front office is instructing their young pitchers to get hitters out in the most efficient way possible. We’ll keep an eye on these trends over the course of the season.

Elliot Soto raised his batting average to .389 with a three hit game. Michael Burgess collected two more hits, but only catcher Michael Brenly was able to cross the plate. The Smokies were just 2 for 13 with runners in scoring position and left eleven on base.

High A – Daytona Cubs. 1 – 6
Daytona finally put an end to their horrific streak of multi-error games. The Cubs’ one error qualifies as their best defensive performance in days. Unfortunately, the offense could not collect enough hits and Daytona lost 5-4.

That Daytona scored even four runs was impressive given that they only managed five hits all night. However, they did walk eight times and left ten men on base. Only Richard Jones had a multi-hit night, but thanks to the frequent walks both Elieser Bonne and John Andreoli reached base twice.

I think the pitching has been good enough for Daytona to have a much better record this season. If they can clean up their defensive issues and find a way to score just a few more runs, this is a team that could go on an extended winning streak. Even though their record is depressing, I think Daytona as a team is better than that record indicates.

Low A – Peoria Chiefs. 3 – 4
Catcher Rafael Lopez had another big game at the plate, but the Peoria Chiefs came up a bit short, losing to Wisconsin 4-2.

Patrick Francescon did not repeat the strikeout-rich performance from his previous start, but he did continue the trend of the day and kept the runners off the bases. He allowed three runs to score (two on home runs), and that was enough to take the loss. Austin Reed was effective in two plus innings of relief.

At the plate, Peoria managed just six hit against ten strikeouts. Other than Lopez, none of the Chiefs had a statistically good day. It is not uncommon for very young professional teams to have trouble scoring runs on the road, so the lack of offense out of Peoria is not entirely unexpected. It will interesting to see how promising players like Reggie Golden and Pin-Chieh Chen make the necessary hitting adjustments as the season progresses.

If you are a subscriber to MiLB.TV, you can see Peoria play during their series with Wisconsin. The only time you can watch the Cubs’ Low A team via the online streaming service is during their road games in Wisconsin, so be sure to take advantage of the opportunity while it exists.