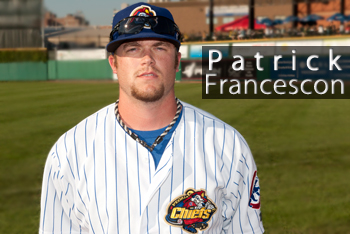 Four games were scheduled, three were played, two were losses, and the Peoria Chiefs rode some great pitching to the farm system’s lone win on Friday.

Tennessee actually played a very good game, but they lost their pitching duel thanks to a single error. The Smokies, I think, are better than their record indicates.

AA – Tennesse Smokies. 10 – 13
Tennessee was shut out on Friday despite out hitting Jacksonville eight to six. The woeful final score was 3-0.

Trey McNutt was very effective in his three innings of work (1H, 2K). An error in the sixth inning led to three unearned runs scoring on Ryan Searle, the only runs Jacksonville managed in the game, and that was enough to seal the loss. Except for that one inning Searle turned in a nice performance in extended relief. Daniel Berlind struck out one to end the eighth.

James Adduci nailed a triple (his first), and Nate Samson and Elliot Soto both had two hit nights to lead the offense. Logan Watkins also reached base twice on a hit and a walk.

High A – Daytona Cubs. 6 – 15
Well, at least they aren’t getting blown out. The Daytona Cubs lost another very close game despite a late inning rally. The final was 4-3.

Eric Jokisch picked up the no decision after pitching seven strong innings (9H, 2BB, 8K). He allowed three runs, but only one was earned. Larry Suarez came in for the eighth inning and allowed a run on two hits, earning the loss.

Matt Szczur was 1 for 5 with a double. Greg Rohan continued to hit with a 2 for 3 day that included another walk and Nelson Perez reached on both a base hit and a walk. The Cubs were fairly efficient with the chances they had. Their three runs came on just six hits.

Patrick Francescon had another exceptional start. This time he went six inning, allowed just two hits, and struck out eight. I’ve seen enough; get this guy on a plane to Daytona. After five starts (27 innings) hitters are batting just .152 off him. He has totaled 26 K against just 4 BB and has a GO/AO of 1.41. The only knock on him is that he has allowed three home runs, but even that only averages to 1 HR/9. That’s not too shabby. I’m not sure how long it will take for the promotion to the Florida State League to happen, but I strongly suspect it will come within the next six weeks.

Bryce Shafer pitched two good innings of relief and Andrew McKirahan was, once again, perfect in his inning of work. McKirahan collected his second save of the season.

Oliver Zapata got back to his usual self on Friday. After going without a hit in three straight games, the diminutive outfielder smacked two singles. Pin-Chieh Chen also had two hits, but it was Paul Hoilman who delivered the big blow. His two run bomb in the first inning proved to be all the runs Francescon and the bullpen would need. Hoilman now has a twelve game hitting streak.

In my mind, though, the biggest story on Friday night was Francescon’s superb start. His performance this season reminds me very much of what Robert Whitenack accomplished last year. Both pitchers were unheralded at the start of the season, but both demanded our attention with their pitching. Since he was a college pitcher it is easy to say that Francescon should be dominating Low-A, but as a 40th round draft pick I don’t think anyone quite expected a performance like this.

If any of our Midwestern readers can make to a ballpark to see this kid pitch, I would love to read your thoughts. I would also like to know how hard he is throwing both his fastball and his breaking pitches. Data like that is inconsistently reported in the low minor leagues, but it is for players in the low minors that I most like to have that data.