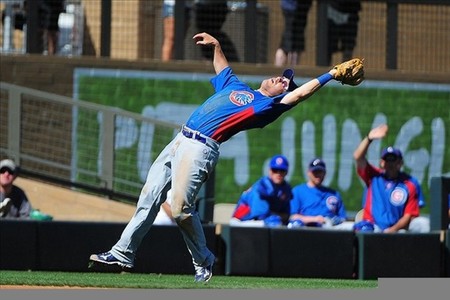 As expected (well, by me anyway), today the Chicago Cubs are expected to call up 24-year-old infielder Adrian Cardenas to take the spot (nominally) of Travis Wood. He’s actually taking the spot of infielder Blake DeWitt, who was DFA’d to make room for Wood yesterday.

Here’s part of what I said about Cardenas the first time the Cubs DFA’d Blake DeWitt to make room for him, and it’s still pretty applicable:

The broad consensus is that the Cubs dropped DeWitt in favor of a cheaper, younger, better-hitting (though less power), more versatile, slightly worse defender. On the balance, it’s easy to see why the Cubs made the move, even if Cardenas isn’t anyone who’s going to knock your socks off. Like DeWitt, Cardenas is no lock to make the Cubs’ 25-man roster out of Spring, but, because he’s theoretically able to back up shortstop (where DeWitt wasn’t), he’s got a leg up.

Head to that link if you want more on Cardenas’ background and scouting report.

Since being picked up, Cardenas has torn up the PCL, hitting so well that teammate Anthony Rizzo calls Cardenas the best hitter on the Iowa Cubs. He’s currently hitting .319/.376/.521 in 26 games at Iowa. Those numbers square with his solid minor league career. His best stat from the minors this year? He’s taken 11 walks and struck out just five times. Yo.

Cardenas is a kid who can hit, but who doesn’t have much power, and doesn’t play any infield position particularly well (he can play them all, though). He’s a lefty, so he could see some starts at second base (or shortstop in a pinch), to give Darwin Barney a day off or two. Maybe more if he hits in the bigs.