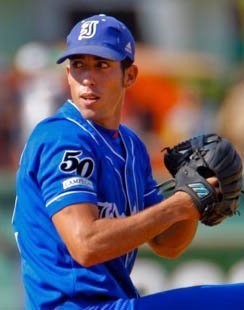 The June draft is rapidly approaching and that means mock drafts are appearing all across the internet. Since Baseball America is one of the foremost publications covering amateur baseball and the minor leagues, it should come as no surprise that their mock draft is always one of my favorites. Version 1.0 was published yesterday. Two of the college pitchers I would most like to see in the Cubs’ system were drafted just ahead of the Cubs in this mock draft. Fortunately, if this scenario holds except for Seattle taking Correa over Zunino, one of those two pitchers taken fourth and fifth likely falls to the Cubs. Even if Baseball America is exactly right, though, Albert Almora will be a very nice addition to the farm system.

Just for contrast, here’s another mock draft published by the Fansided network (for whom I used to write). I have serious doubts about their guess at the Cubs’ first round pick; I’m not convinced Smoral will even go in the first round, let alone the first six picks. It is very hard to imagine a scenario in which the Cubs would pass on Gausman to reach for a lefty with a history of foot injuries, but that is the projected pick. Like all mock drafts, these will likely be updated fairly frequently before the big day arrives.

Randy Wells has pitched a little better since he went to Chicago for a start. He threw six innings of one run baseball to earn his second win of the season. Nate Robertson and Esmailin Caridad yielded absolutely nothing over the final three innings.

Fresno managed to shut down the Cubs’ two best prospects, Anthony Rizzo and Brett Jackson, by holding both to just a walk apiece. Fortunately, Josh Vitters (3H, 2 doubles), Luis Valbuena (2H, HR), and Dave Sappelt (2H, double) were ready and willing to pick the slack. Jonathan Mota added a triple and the starting battery of Wells and Juan Apodaca both hit a double in the game.

AA – Tennesse Smokies. 15 – 20
Tennessee rode some very good pitching to their fifteenth win of the season. The final score was 4-1.

Dae-Eun Rhee scattered four hits across seven and two thirds innings on his way to his third win of the season. The promising right hander gave up one walk and struck out four in his 92 pitch start. Fourteen of his outs came on ground balls; that’s a great trend for a young pitcher.

Brian Schlitter finished the game with a walk and two strike outs to earn his first save of the season.

Thanks to five walks Tennessee was able to score their four runs on only six hits. Logan Watkins continued his exceptional play by reaching base three times with two walks and a single, a feat matched by Matthew Cerda. Nate Samson‘s double was the lone extra base hit for the Smokies.

High A – Daytona Cubs. 12 – 22
No sooner does Daytona string a few wins together than they erase that progress with a few losses. The Cubs fell again by a score of 8-3.

Frank Del Valle was roughed up in the first inning, but pitched decently after that. Larry Suarez did not pitch well in his inning of work. A.J. Morris and Anthony Zych put zeroes across the board in the final two innings.

Arismendy Alcantara and Elieser Bonne both stayed red hot with a double apiece. Sergio Burrell earned two of the Cubs’ nine hits, but as a whole the team was unable to put together any sustained rallies. Daytona was just one for eight with runners in scoring position.

None of Peoria’s pitchers were particularly good on Thursday, but that doesn’t mean we are without good news. On the contrary, Gerardo Concepcion pitched his best game of the season. He did have his typical first inning troubles, but this time he limited the damage to just two runs (one earned). Despite the five walks that helped keep him in and out of trouble over the next three innings, those two first inning runs were all he allowed. With his ground ball inducing stuff, it is easy to imagine him moving up the system fairly quickly once he refines his control a bit.

Willengton Cruz pitched one inning and gave up a two run homer. Benjamin Wells pitched the final four innings and allowed two more runs of his own. That resulted in Wells earning his second loss of the season.

Is Marco Hernandez finally heating up? He had two hits yesterday, including a double. After an absolutely horrible start to the season the young switch hitter has rebounded to hit .300 so far in May.

Rafael Lopez also had two hits and a double. Paul Hoilman kept his record setting hitting streak alive with yet another base hit.