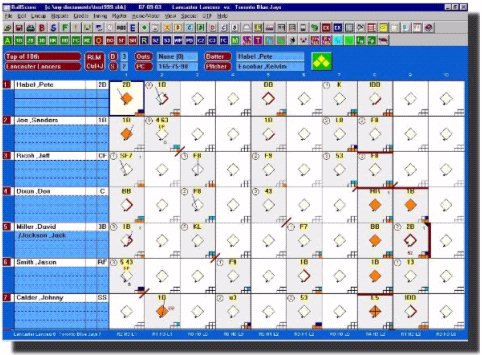 We had only two minor league games yesterday, both in the lower levels of the system. Since we have some extra time as a result of that, let’s take a look at the system leaders in a few statistical categories.

I’m just going to report raw numbers here. Keep in mind that each league is more or less favorable to hitters and pitchers compared to the others. A SLG of .420 in the Midwest league is a much better stat than that same number from the Pacific Coast League because of how much more pitcher friendly the Midwest League is. There are ways to normalize those numbers to allow a more direct league to league comparison, but we’ll save that conversation for a different day.

On the pitching side of things, Patrick Francescon is right at the top of the boards. He leads in WHIP (0.800) and opponents batting average (.160) and is second to Eric Jokisch strikeouts (48 to 39) and second Austin Kirk in ERA (1.75 to 2.09). I think the most surprising (and impressive) stat does not belong to any of these pitchers though, but to Chris Rusin. As we have discussed in the past, the Pacific Coast league is a notorious hitters paradise. Despite that, Rusin has a WHIP of just 1.050.

Of course, Rusin doesn’t have to face Rizzo. That no doubt is helping his numbers, if only slightly.

AAA – Iowa Cubs. 17 – 21
The Iowa Cubs had a day off on Wednesday. They return home tonight in a multi-piano musical extravaganza!

AA – Tennesse Smokies. 17 – 23
The Tennessee Smokies were also off on Wednesday. They are now on the road in Mississippi.

High A – Daytona Cubs. 15 – 22
Dayton had a double header scheduled to make up for Tuesday’s rain out, but they only managed to play one game. The Cubs won that game 6-2.

Matt Loosen pitched a great game. He left with two outs in the sixth inning having allowed just one hit all night. Tony Zych blew that lead, but the Cubs rallied back for four runs in the eighth to give Zych his first win of the season. Ty’relle Harris pitched a scoreless inning to seal the game.

Matthew Szczur led the Cubs with a single and a triple in four at bats. Arismendy Alcantara also had two hits, as did Elieser Bonne. Sergio Burrell contributed a double for the Cubs, who were a remarkable 7 for 12 with runners in scoring position.

Michael Jensen pitched four good innings, but he was still on the mound when Clinton scored four times in the fifth. It was Sheldon McDonald, though, who actually took the loss after allowing one run in his two innings on the hill. Luis Liria pitched a scoreless frame to wrap up the game.

Ryan Cuneo had three hits, including the Chief’s only extra base hit all night (a double). Wes Darvill and Taylor Davis both had two hits apiece. The Chiefs were efficient in this game, but took the loss despite going 5 for 8 with runners in scoring position.