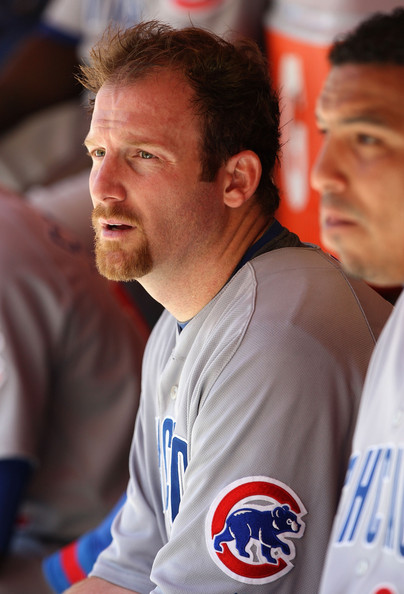 Ryan Dempster will be traded.

It was always possible as the Chicago Cubs careen out of control and Dempster’s value remains high. But, given his affection for Chicago, his no-trade rights, and the Cubs’ theoretical ability to make him a “qualifying offer” and pick up draft picks if he signs elsewhere next season, it was fair to doubt whether Dempster would ultimately be traded.

Dave Kaplan has no doubt, however:

I believe that it is a foregone conclusion that Ryan Dempster will not be on the Cubs roster after the July 31st trade deadline. He is throwing extremely well and with his contract up at the end of the season, he will not require a major financial commitment from whoever acquires him. As long as he stays hot, the Cubs will be able to extract a fairly substantial package of players from a contending team as starting pitching is very tough to add in season ….

Who has trade value that the Cubs would be willing to deal? Dempster — who I am 100 percent confident will be traded — and Matt Garza who is a top-of-the-rotation talent but could bring back a huge haul in a blockbuster deal if the Cubs choose to move him and perhaps a prospect or two out of the system if the deal made sense.

Kap doesn’t mention Dempster’s no-trade rights (Dempster can block any deal), but I assume he’s aware of those rights, and remains “100 percent confident” that Dempster will be traded.

Dempster’s tradability has been discussed at length (most recently in that “qualifying offer” link above), and nothing has changed in the last couple weeks. Yes, he’s had a couple down starts, but Dempster’s value is pretty much set at this point. He’s not going to have a sub-2 ERA all year, but he’s established that neither is he the guy who had a 9+ ERA last April. He’s a very good starting pitcher, who would bring value to virtually any rotation in baseball. For teams looking to add a quality starter who can win a postseason game or two, Dempster will be worth something in the second half.

But the ball remains firmly in his court. That’s why it’s very interesting to hear Kaplan guarantee Dempster will be traded.