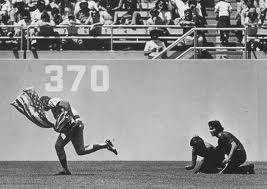 Baseball and Memorial Day. They go together like apple pie and ice cream, Garfield and Odie, Holmes and Watson.

This day is set aside in the honor of those in service, a group deserving of far more than the sparse thanks and recognition they receive. It is the ordinary soldier, often forgotten, that should be most remembered on this day.

And yet, we are a culture that manifests itself through symbols. A lone wreath on a solitary grave expresses the gratitude of a nation towards millions. In that language of symbols, I think it is baseball that represents America the best.

Baseball emerged out of the ashes of the Civil War and wrote its own history alongside and intertwined with some of the most turbulent passages of the American saga. While the nation stumbled its way through the trials of a century, baseball led a culture through those troubled times and guided this land out the other side.

When America plunged into the Great Depression, Lou Gehrig taught the nation about endurance. In the face of Nazism and rampant Antisemitism, baseball offered Hank Greenberg. When the time came for America to join World War Two, many of the game’s best stars joined the ranks and served on nearly every front. As the rest of the nation rallied to support those soldiers with the means of war, some of the game’s unlikeliest heroes embodied the spirit of everyone forced by the march of destiny into filling their changing roles as best they could. At the dawn of the civil rights movement, baseball’s own Jackie Robinson led the way. When many feared that war, corruption, and protests had placed the nation on the brink of anarchy, Rick Monday saved the flag. And in the aftermath of September 11, 2001, baseball once again provided the nation with a symbol, a release.

James Earl Jones said it best in his finest monologue. “This field, this game… It reminds us of all that once was good, and could be again.”

History will one day again require that our blood be spilled, that our sacrifice be poured out in support of our nation. Events will again throw us into a chaotic world in which certainty seems to have vanished. Times will change. We will change. And yet through it all, baseball will mark the time.

Honor those who fell. Celebrate those who came home. Enjoy baseball, not just as a game, but as a living connection to our past and a symbol of that brighter future lurking just over the horizon.

AAA – Iowa Cubs. 22 – 27
Iowa loves beating up on the Memphis Cardinals. Let’s hope these young Cubs keep that habit when they graduate to the majors. The final in this glorious win was 5-1.

Chris Volstad won his second game in a row. In seven innings of work he struck out four, walked none, and threw 55 of his 79 pitches for strikes. His ground out / fly out rate was a very good 8 – 2. In short, Volstad pitched like the guy the Cubs thought he was when he came over from Miami. If he can continue to throw strikes and induce ground balls for a few more games, I think he’ll head right back to Chicago.

Speaking of heading to Chicago, say hello to Carlos Marmol. How does one inning, no hits, one walk, and three strikeouts sound? That’s the kind of result that will earn Marmol some late inning chances in Chicago in a few weeks.

Not to be outdone by the other visitors from the majors, Esmailin Caridad struck out two in a perfect ninth inning. Caridad has been inconsistent this season, but he has shown flashes of the ability that had him penciled in as the Cubs’ set up man a few seasons back. His name could come up a time or two in trade talks this summer.

Anthony Rizzo left the game early with a sore wrist (Note: He is NOT being called up yet), but first he doubled and drove in two runs. Interestingly, Rizzo has more home runs (17) than he does doubles (12).

Alfredo Amezaga, Dave Seppelt, Luis Valbuena, and Josh Vitters all had two hits in the game. Valbuena also hit a double. Brett Jackson stole his eighth base of the season; Ty Wright stole his first.

AA – Tennesse Smokies. 21 – 29
The Tennessee Smokies were off on Sunday. They will return home on Memorial Day evening against Huntsville.

High A – Daytona Cubs. 19 – 28
Bad weather cancelled the Cubs’ game on Sunday, and Monday is a scheduled off day (why would any baseball team be off on a national holiday in the summer?). On Tuesday the Cubs are scheduled to play a double header in Brevard County. Robert Whitenack is due to make his first post-surgery start for Daytona in game one of that twin bill.

Low A – Peoria Chiefs. 22 – 28
Thanks to good pitching Peoria led early, but once again the bullpen let it slip away. Wisconsin scored twice in the ninth as the Chiefs lost 3-2.

Michel Jensen had another good start as he struck out eight over six innings. Sheldon McDonald kept Peoria in the lead as he allowed just one hit over two innings, but Yao-Lin Wang could not shut the door in the ninth. Wang allowed two runs to score on two hits, including a home run, as he blew his first save of the season.

Taiwan Easterling finished this game a home run short of the cycle. The young outfielder also stole two bases and now has eleven steals this season.

This game marked the first time Giansanti has appeared behind the plate in a professional game. Wisconsin tried to run on him four times, but Giansanti cut down two of those attempted steals at second base. He is now without a doubt one of the most versatile players in the Cubs’ organization. He is not likely to ever hit his way into the majors, but as Koyie Hill has taught us, a backup catcher can stick around without much of a bat. That Giansanti has experience playing at every single position on the diamond except shortstop only adds to his potential utility value.