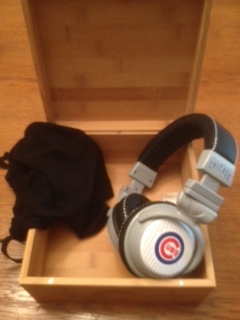 I recently had the good fortune of being sent a pair of BiGR Audio Chicago Cubs headphones – that’d be them to the right, though you can get a better look at the link. (This job may not be the best paying in the world, but it certainly has its perks.)

They are headphones for iPods, iPhones, and iPads, and my charge was simple: check them out, see what you think, and talk about them if you like them. I did, I did, and I do. So I’m talking about them.

I’ve only ever had earbuds in my post-iPod/iPhone/iPad life, so these were the first headphones I’d ever used on one of those. They sound great, have a little remote built in, and, obviously, they have the big-ass Cubs logo on the side. Win, win, win. The cherry on top? They come in a beautiful wooden box: The picture doesn’t quite do it justice. True story: when the headphones arrived and I saw the box, the first thing I said to The Wife was, “Holy crap – well, I know where I’m keeping my smaller Cubs keepsakes from now on.” My signed Ernie Banks ball is in there right now.

Now that I’ve talked ’em up, want to win a pair for yourself? BiGR has generously given us two pairs of headphones to give away to you fine folks.

There are two ways to win one of these bad boys for yourself, one via Twitter, and one via Facebook: (1) You will see a Tweet soon appearing on BN’s Twitter with the hash tag #BNHeadphones – when you see that Tweet, follow the instructions, and you’ll be entered to win; or (2) Find this post on the BN Facebook Timeline, share it, and drop a comment saying what you’d love to hear on your new Cubs headphones (for example, Matt Garza striking out Corey Hart in the 9th inning to complete a no-hitter (and you can’t take that one, it’s mine)). Obviously you can enter both ways if you like, but you can only win once.

The winners will be selected at random from all qualifying entries submitted before 3pm CT tomorrow, Friday, June 1. I’ll then put you in touch with BiGR Audio so they can send you your prize.

There are no warranties – express or implied – here. I’m just trying to hook a couple random winners up with some awesome headphones.