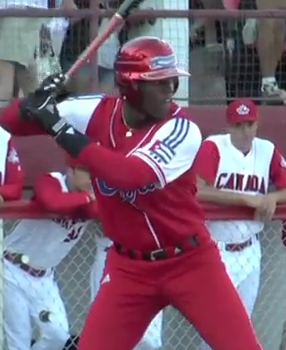 I’ll still have a big Jorge Soler piece tomorrow – his agents’ imposed deadline for teams to submit offers – but I thought this small bit worth passing on. Today, the 20-year-old Cuban outfield prospect worked out for teams (presumably who wanted to make sure he’d been staying in shape, and who wanted to see him one last time before offering up the big bucks), and, yes, the Chicago Cubs were among those in attendance.

Cubs GM Jed Hoyer spoke to reporters about the workout, and he confirmed the Cubs’ interest – the worst kept secret in the international amateur market – but was otherwise tight-lipped.

“We obviously scouted him extensively — a lot of teams have — and a lot of teams are involved,” Hoyer said. “We had a similar situation with [Yoenis] Cespedes this Winter. It will be intriguing. We’ve done our work on him.

“It’s not surprising [lot of teams are involved]. He’s really talented and there is that July 2 uniqueness that adds to it.”

Hoyer was, of course, referring to the date on which the international spending restrictions in the new CBA kick in. If Soler signs before July 2, he can get a whole lot more money than if he signs after that date.

And, more importantly, the Cubs can outbid everyone else without any consequences if they choose to.

By the way, even though tomorrow is the “deadline” to submit bids, be aware that it’s a completely and totally arbitrary deadline. This is not a “sealed bidding process” like the Yu Darvish posting process, for example (unless Soler’s agents want to run it that way). Instead, I would expect the agents will gather the offers tomorrow, and then inform some of the most interested teams of where they stand, and give them an opportunity to up the ante a bit. That is all to say: I’m not sure we’ll actually get a resolution by tomorrow. Or Friday.

But it will definitely come before July 2.

[Super paranoid thought: the Cubs’ brass usually says nothing at all about guys they actually want. Any chance Jed knows the Cubs aren’t going to bid big, and are confirming their interest very publicly to drive up the price? Nah. That’s super paranoid.]
Filed to: Chicago Cubs
Latest from Bleacher Nation: