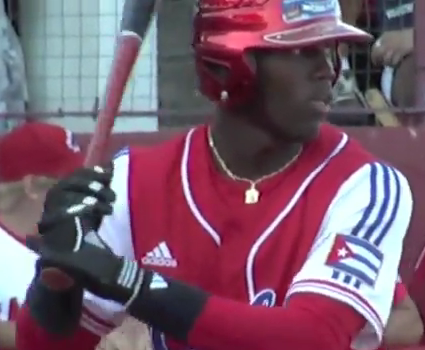 I thought it worthwhile to have a centralized place for us to play the waiting game today, as we await 20-year-old Cuban prospect Jorge Soler’s final (final) decision on which team he’ll be signing with for an exorbitant amount of money.

The decision is expected by all sides to come at some point today (UPDATE: Buster Olney was just on the radio saying we might not hear for another 48 to 72 hours … you must be pulling my leg), and the Cubs are still a teeny, tiny favorite, but by no means prohibitive. The teams thought to be most involved at this point are the Cubs, Yankees, Dodgers, and Braves, with the Cubs and Yankees believed to be the biggest bidders. As of this moment (10:17 am CT), no one seems to know anything more than that with any kind of real certainty.

My guess? He’s traveling to the site of a press conference as we speak. (Per that previous update, maybe not.)

So, we wait. Unleash the obsession in the comments, if you’d like. And if you hear anything, drop it in there as well. The waiting is the hardest part, but it can also be the most exciting and fun.

ANOTHER UPDATE: Tim Brown says the Dodgers are out.

MOSTLY NON-UPDATE: Jon Heyman says other execs still think the Cubs are the favorite, but he’s not committing to anything. So, yeah, mostly a non-update.

OK, NOW HERE’S AN UPDATE: Joel Sherman, who was the first to note that Theo Epstein to the Cubs could actually happen, says he’s heard the Cubs won the bidding. Squeee…. wait. Wait for it.

A REINFORCING UPDATE: Kevin Goldstein cites a source who told him last night that he didn’t think the Cubs had a “choke point” on Soler, and would keep one-upping all bids until they got him. If so, the price could be mighty steep.