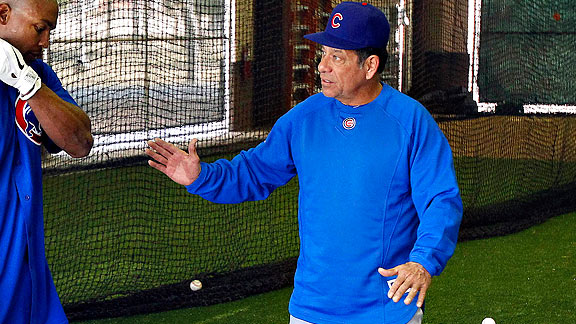 Today, the Chicago Cubs fired hitting coach Rudy Jaramillo, and replaced him with James Rowson on an interim basis, who had been serving as the organization’s minor league hitting coordinator.

I know you’re probably having two disparate reactions in tandem to this news: (1) whoa! and (2) big whoop.

I’m not really having either one.

On the “whoa,” while it is surprising to see Jaramillo dismissed mid-season like this, you probably should have seen the writing on the wall for some time. For one, I was surprised when Jaramillo was brought back at all this season. As a holdover – and a well-paid one – from the Jim Hendry regime, Jaramillo’s aggressive approach never sat well with me, and it never really fit in with what the new front office was all about. Further, Dale Sveum was essentially an incoming hitting coach, himself. The fit just wasn’t there, and that’s to say nothing of the poor results during his two and a half years with the Cubs (2012 was the final year of his three-year, $2.4 million deal).

The other reason I’m not whoa’ing? I actually heard this was coming about two weeks ago. It wasn’t certain, and, because it involved a firing, I didn’t feel comfortable running with it at the time. But, now you know. This has been in the works for some time.

This move isn’t about trying to make the Cubs magically better in the second half. It’s about moving on.

You know how you can tell for sure? Rowson, Jaramillo’s replacement, was brought into the Cubs’ organization this offseason as the minor league hitting coordinator after spending time in the Yankees’ organization.

Think about that: a new front office comes in, “goes young” in the organization, brings in a new manager, and brings in a new minor league hitting coordinator. Rowson was probably always going to get a crack at the hitting coach job. It just makes sense.

We’ll probably have more on the end of the Rudy Jaramillo era, such as it was, but I can’t say I’m terribly upset today. Jaramillo was, by all accounts, a nice guy, and a smart baseball man. But he never felt like a good fit. Best of luck to him on his next gig.

Tom Beyers takes over as the interim minor league hitting coordinator, a job he essentially held for a couple years before Rowson’s arrival.