Cubs' Minor League Daily: Peoria Is In A Playoff Race Skip to content 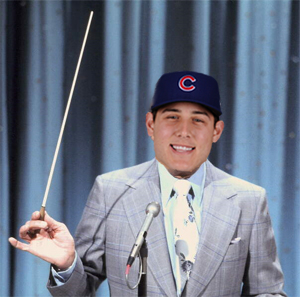 The Chicago Cubs have a .500 team in the farm system! Not only that, they are in playoff contention!

The Peoria Chiefs, thanks to a remarkable run that includes a seven game winning streak, now find themselves in fourth place in the Midwest League Western Division. The top two teams in each division in each half of the season make it to the playoffs. With six games to go before the end of the first half, Peoria trails second place Beloit by just four games. Even better, the Chiefs are travelling to Beloit for a three game series that starts tonight.

Peoria is the hottest team in the league, and Beloit has lost three straight. If you are hungry for an early taste of playoff race baseball, be sure to tune in for the Peoria vs Beloit game tonight at seven. As always, all internet radio feeds of all minor league games are free.

AAA – Iowa Cubs. 29 – 36
After trailing early, Iowa rallied back to tie the game. The tie did not last, though, and the Cubs ultimately lost 9-7.

Jay Jackson started this game, and you know what that means. Sure enough, he was bad. He did not get out of the fourth inning and allowed seven runs on 11 hits with three walks. He did strike out five, which isn’t bad, but it was not enough to salvage this start. Hopefully Iowa will soon decide that this guy is not a starting pitcher and stash him in the bullpen where he has excelled this season.

Ty’relle Harris did a nice job in relief of Jackson. He recorded ten outs, struck out one, and did not give up a hit. Jeff Beliveau wound up with the loss after giving up two more runs in his inning of work, and Rafael Dolis was flawless in the ninth.

The Anthony Rizzo Show continues to roll along. This time he was 3 for 4 with two more home runs (he now has 22) and a double. He was also in the middle of an unusual 8-3-6-4 double play. Just a few more weeks and he should be in Chicago.

Dave Sappelt also had a two hit night that included a double, as did Josh Vitters. Sappelt and Vitters each had a walk as well.

McNutt only recorded ten outs before he was chased. He gave up nine runs (eight earned) on nine hits while striking out two. The good news, so to speak, was that he did not walk anyone. I think it is safe to say that McNutt did not have his best stuff in this game, and as a result he took his fifth loss of the season.

Jeffry Antigua and Kevin Rhoderick both had pretty good games out of the bullpen, but Brian Schlitter struggled. The final inning went to infielder Nate Samson; he can now add a Double A strikeout to his list of accomplishments.

Junior Lake walked and crushed his fourth home run of the season in this game. Welington Castillo also homered. James Adduci had three hits; Justin Bour had two hits (including a double).

High A – Daytona Cubs. 28 – 34
Daytona is out of the basement and into fourth place. If they keep getting pitching like they did on Monday, they’ll keep climbing the standings in a hurry. Daytona rode another great start to a 5-0 road win.

Matt Loosen pitched six innings, gave up two hits, and struck out seven. After this great start his season ERA is down to 2.63. But as great as this start was, Daytona’s bullpen might have been even better. Hayden Simpson again demonstrated what he can do when he throws strikes as he struck out two in a hitless inning of work. A.J. Morris matched Simpson’s inning strikeout for strikeout, and Tony Zych trumped them both by striking out the side in the ninth.

Daytona had ten hits in this win, including two each by Greg Rohan and Ronald Torreyes. Rohan also doubled, as did Micah Gibbs and John Andreoli. The Cubs were again active on the base paths, stealing a combined four bases. Arismendy Alcantara swiped two bags (and now has 18 on the season). Torreyes and Andreoli stole one each (Andreoli’s was number 17).

Low A – Peoria Chiefs. 32 – 32
The Peoria Cheifs got their season record back to even with a thrilling come-from-behind, 10-9 win at home.

Gerardo Concepcion gave up all nine of Kane County’s runs in his four innings of work. The damage was done on 11 hits (including a home run) and three walks. All nine runs were earned.

But then the bullpen stepped up and threw five innings of shut out baseball. Sheldon McDonald struck out two in his three innings of relief, Luis Liria walked two as he tossed a hitless eighth, and Hunter Cervenka picked up the win with a perfect ninth.

Dustin Geiger was slated to be the Opening Day third baseman for Peoria, but his season start was delayed by injury. He arrived in town last week, and last night he broke out with a huge game. Geiger finished the night 4 for 5 with a two run homer, three RBI (including the game winner in the ninth), and three runs scored. Paul Hoilman had three hits, including a solo home run. Sergio Burrell also had three hits (including two doubles) and Pin-Chieh Chen drove a triple as part of his two hit night. Zeke DeVoss also tripled.

Speaking of Zeke DeVoss, did you see his fantastic catch yet?