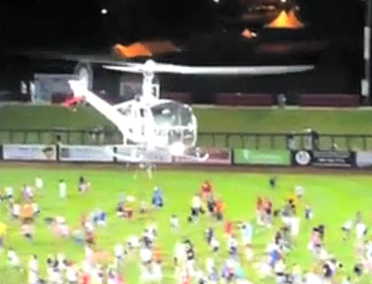 If you have not yet made the trip to Peoria to watch the Chiefs play, then June 24 might be the day to change that. In addition to a great ballpark and some fine baseball from some of the Cubs’ best prospects, including shortstop Javier Baez, Sunday’s game will feature additional fun and insanity for the whole family. For example, the first one thousand fans under twelve will receive a special Peoria Chiefs Build-A-Bear.

And for the rest of the fans, June 24 is another Candy Drop. For those who may have missed it earlier in the season, the Peoria Chiefs’ Candy Drops are quite literally nothing less than pounds and pounds of candy being dumped out of a helicopter onto a crowd of frantic children swarming in the outfield. I remain in awe of the brilliant mind that came up with this promotion, and I only regret that I will not be there to witness the madness in person.

Not convinced? Check out this three minute video of candy drop madness from a similar promotion at another minor league stadium. It’s almost enough to make me wish I was twelve again.

Iowa – The Iowa offense did not show up in this one, and the result was a 6-2 loss.
Tennessee – The Smokies were very impressive as they opened the second half of the season with a 3-1 win.
Daytona – Led by some great pitching, the Cubs won again by a score of 3-0.
Peoria – Peoria was off on Thursday. The open the second half this evening at home.
Boise – The Hawks had to rally in the ninth, but they did win the game 5-4.
Arizona – The bullpen struggled as the AZL Cubs fell 5-1.