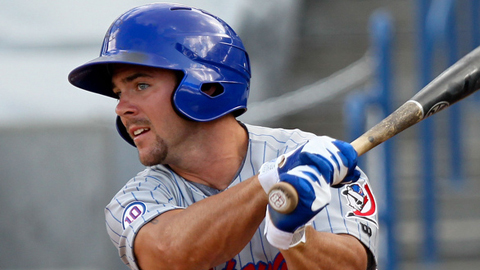 Matthew Szczuris going to remember this one for a long, long time. The center fielder had been severely limited in playing time lately by a knee injury, so a game like he had on Wednesday had to feel extra special.

Hitting in his usual slot atop the batting order, Szczur was 3 for 6 with a double, two runs scored, and a one out grand slam in the fifth inning. That blast, his second homer of the season, was the blow that pretty much put this game away. That he hit it against the Mets only makes it all the sweeter, especially given what happened in Chicago just a few hours prior.

While this big game highlights that he has been hitting High-A pitching fairly well since returning from the injury, the Cubs should not be in any hurry to promote him. Szczur is still learning to translate the athletic abilities that could have made him an NFL draft pick into baseball abilities. There is no reason to rush him at this point in his career. I think he could be a very late season call up to Tennessee, but I would not expect anything more than that during the normal season. He could be a candidate for the Arizona Fall League, though, if he continues to play well.

Should he maintain his progress, I think his major league ETA is somewhere in 2014. His defense in center will not be an issue; the bat remains to be seen. If he can keep his OBP high enough he projects as a nice lead off hitter. If he can’t, he’ll probably look to wreck havoc on the bases out of the eight slot.

Iowa – The wind was blowing out in Iowa, but only Oklahoma City was able to take advantage in this 10-6 Cubs loss.
Tennessee – Tennessee got out hit 20 to 2 and lost at home 11-0.
Daytona – Since Daytona blew out the Mets 12-1, I won’t even talk about their three errors. Promise.
Peoria – Peoria tried to rally, but it was much too and way too late to make any real difference. The Chiefs lost 8-3.
Boise – The Hawks were swept in Spokane. The final of this one was 6-2.
Arizona – The game time temperature was only 102 degrees in this 5-4 Cubs win.