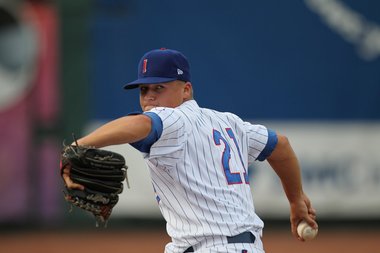 The Chicago Cubs named their minor league Pitcher and Player of the Month yesterday, sending both awards to Tennessee. Neither pick matched my own selections, but I can’t argue with either of them.

The pitcher of the month went to Nick Struck. The right hander posted a 2.45 ERA over five starts in June while striking out 23 in 29 innings. Second baseman Logan Watkins earned Player of the Month honors by hitting .352 with an OBP of .452 and a thirteen game hitting streak. Both players have major league potential, Struck as a back of the rotation starter and Watkins as a quality starting second baseman, and both could be in Chicago in the next year and a half or so.

[Brett: I think Luke was being very clever with that headline, but I can’t be certain…]

Iowa – With their 4-1 loss, the Cubs fell twenty games out of first place.
Tennessee – The Smokies took advantage of four Chattanooga errors and won 6-4.
Daytona – Daytona used a six run sixth inning to power their way to a 7-3 win.
Peoria – The Chiefs had three errors and were the victims of a shut out. They lost 6-0.
Boise – Boise took an early lead but could not hang onto it. They lost 7-5.
Arizona – The Cubs out hit the Rangers 12 to 9, but they lost anyway 5-4.