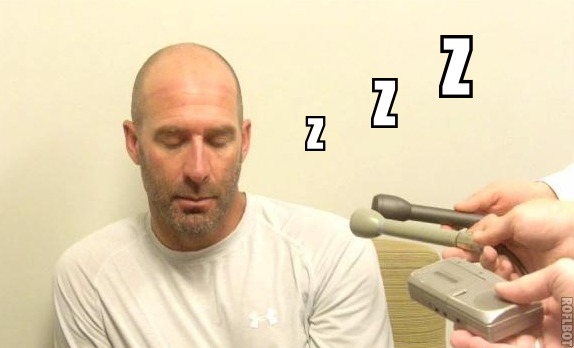 The wee hours have arrived, and I’m still feeling all right. I’m expecting the feeling of “crash” any moment, as a yawn or two have slipped out. This is approximately five hours later than I’m typically up.

Matt Garza is being pursued hotly by a variety of teams (or he’s not). Alfonso Soriano said no to the Giants.

I wonder how far the Cubs and Giants got into discussions before the front office spoke to Soriano, and he said thanks-but-no-thanks on heading to San Francisco? And I *really* wonder what the return would have been. Ah, well.

I’m happy with the two deals so far, and I’m happy to learn that the Cubs are still aggressively working to move valuable pieces like Matt Garza.

I started chugging water a little while ago to try and stave off caffeine-induced headaches.

How awesome are the ‘Breaking Bad’ episodes I’m about to watch going to be?

@BleacherNation It is appreciated to have new material to read on nights when I am on duty to rock the baby. #BNBlogathon

Considering the difficulty I just had explaining to *my* wife the #BNBlogathon, I don't envy the conversation @BleacherNation had w/ *his*.

Miss the blissful ignorance of my youth at trade deadline, but @BleacherNation makes it so damn fun. #BNBlogathon

Hey, my picture-taking-thingy has special effects!