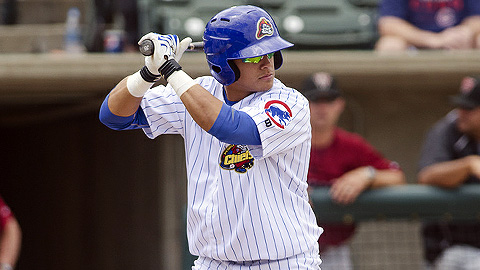 Baez, 19, made short work of pitching in the Midwest League, hitting .333/.383/.596 with 12 homers and 20 steals. He also surprised scouts by playing fairly well at shortstop, despite his larger frame. The thinking is that he won’t stick at shortstop long-term, but the move to third base is easy enough that the Cubs would be best served letting him stay at shortstop as long as possible.

This front office has, historically, been slow and methodical in its promotion decisions, so it wouldn’t have been a surprise to see Baez stick at Peoria for the full year. The fact that he’s getting this promotion right now is a bit surprising, and a bit exciting.

The climb up the ladder could have ramifications throughout the system, as it opens up a spot at Peoria for someone to come up, and it also potentially displaces surprise break-out Daytona prospect Arismendy Alcantara, who has been out for some time with a leg injury. Hopefully this doesn’t mean Alcantara’s injury is serious, and instead is simply a reflection of the Cubs’ desire to challenge Baez.