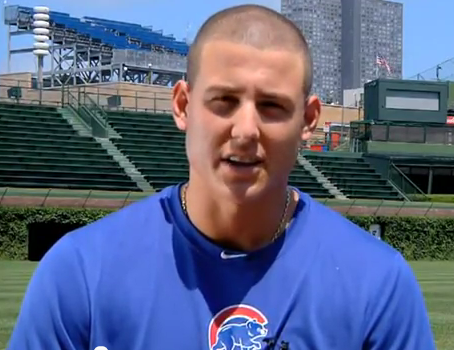 The Chicago Cubs did something pretty special for a young fan named Luke Strotman, who is battling leukemia:

Awesome, both in content, and in what it represents.

It would have been very easy for the Cubs to produce this video, and then send it out to the four corners of the media for some easy PR. But they didn’t. You can see there who posted the video – a user named MarkStr20, whom I’m guessing is Luke’s father (UPDATE: It’s his brother, and see below for more info). In other words, the Cubs made this video especially for Luke, sent it to his family, and left it at that. It’s only because Luke’s brother posted it that we get to see it (and we thank him).

That makes me feel pretty good about the organization, and makes me proud to be associated with them as a fan.

And, of course, to Luke: we’re all looking forward to seeing that first pitch at Wrigley Field.

UPDATE: From BN’er Marco, in the comments:

I’m a friend of Mark Strotman, Luke’s brother, and he’s been actively getting the word out and supporting his brother’s cancer fight.

What a tremendous gesture by the Cubs. Brought me close to tears.