Carlos Marmol is Killing It Lately - What's the Plan? Skip to content 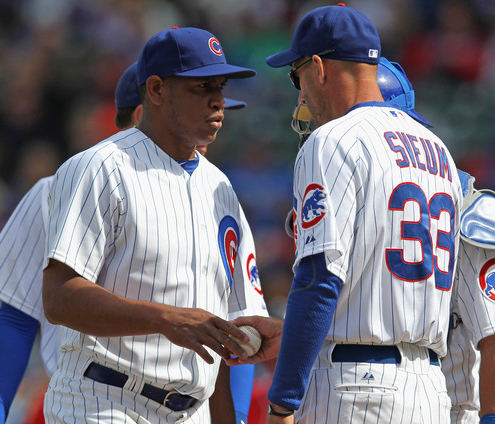 I’ve been mentioning it here and there for a few weeks now, but, as his performance has improved even further, the story has crossed over into the mainstream media. I’m referring, of course, to Chicago Cubs closer Carlos Marmol’s recent stretch of actual honest-to-goodness effectiveness, which netted not one, or two, or three, but four articles in the past 24 hours.

Chicago Cubs manager Dale Sveum, who instructed Marmol to start using his fastball more just before Marmol’s season turned around, was quick to compliment Marmol when asked if he expects the righty to be his closer in 2013.

“I don’t see why not right now,” Sveum said, per Paul Sullivan. “Knock on wood, he’s been as good as anyone in baseball since he’s been back in the closer’s role and the save opportunities he’s had …. He’s the one guy on our roster who next year will have closed. It’s a commodity that’s very difficult to find, and we’ll already have one going into next season.”

Marmol remains eminently tradable this month, given his onerous contract (it pays him $9.8 million in 2013, an amount that no team is going to want to claim outright (and, if they did, I’d think the Cubs would be all too happy to say, “okey dokey! he’s yours!”). His increased effectiveness of late isn’t going to “fool” any teams into forgetting his wildness and unpredictability. But it might remind them of how dominant he can be when he’s on. Is it enough to get a team to pull the trigger on giving up a decent prospect (assuming the Cubs eat about $5 or $6 million)? It’s possible.

But it’s also possible that the Cubs will have to hope that Marmol keeps this up for another month and a half so that they can try and deal him in the offseason, when the market for his services – if not the urgency – will be slightly more robust. Notwithstanding Sveum’s comments about Marmol being the Cubs’ closer next season, if the Cubs can wring any value out of the final year of Marmol’s deal, which expires after 2013 (when Marmol turns 30), they’re going to make that trade without hesitation. They’ll deal with the 2013 closer fallout after.