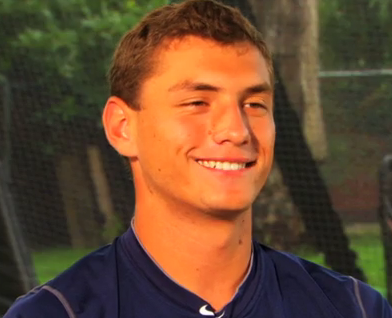 We discussed it this morning in the comments, and, as if on cue, it happened: 2012 first round pick Albert Almora will be promoted to short-season A-ball tomorrow. The 18-year-old center fielder, who was the sixth overall pick in the 2012 Draft, will join the Boise Hawks after opening his professional career in rookie ball in Mesa.

There, Almora hit well in limited time, particularly lately – his line now stands at a healthy .347/.363/.480 in 80 plate appearances. Boise’s season has just shy of three weeks left, so Almora will get in a fair number of at bats at that level, but not enough to really judge his development. The promotion is more about giving him a taste of a higher level, in anticipation of the real challenge, which will come in 2013. Keep in mind: Almora just turned 18 in April, so even reaching Boise at this stage in his career is something of an accomplishment.