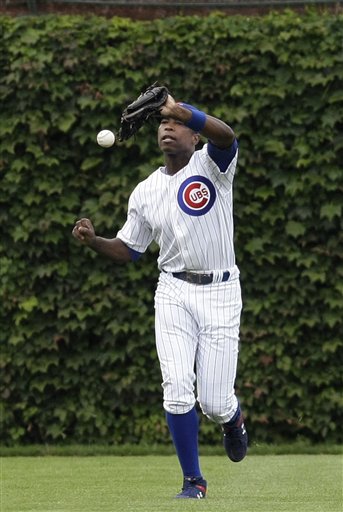 I wrote about the Melky Cabrera suspension and the instantly-jumped-to-conclusion regarding Alfonso Soriano heading to the Giants yesterday. There, I basically said Soriano has already told the Cubs he wouldn’t accept a trade to the Giants, so I’m not sure why that would change now.

And, le sigh, that’s pretty much what Soriano said when he was swarmed by reporters after yesterday’s game.

“I don’t think so,” Soriano said when asked if he’d reconsider going to the San Francisco Giants. “San Francisco is not good weather to play in. It’s on the West Coast and I’ve never played on the West Coast. We’ll see what happens if they call. I’ll talk to my family then and see. It’s not my call. I know it’s 50 percent my call, but it’s my family’s, too. I’d talk to my family and see what happens.”

In black and white, the quotes seem to leave open the possibility that Soriano could still change his mind and head to San Francisco (if they come calling, that is), but apparently everyone in attendance took his words the same way: he’s not going to San Francisco.

So, even if the Cubs line up a deal that they feel improves the team and the organization for the long term, and puts Soriano in a great position to be in the thick of a playoff race not only this season, but in the near future, it could all be totally fruitless.

Now, I understand if your natural urge is to feel like this:

I’ve got a little Angry Panda in me, too.

Don’t get me wrong, I’m not angry at Soriano. These 10/5 no-trade rights are a collectively bargained thing, and he’s earned the right to wield them however he wants. He doesn’t have to consider any deal.

But, even if I’m not angry at him, I’m certainly frustrated. On a personal level, I don’t understand why guys cling to a sinking ship rather than take the opportunity to be moved into a playoff race. I’m a competitive guy, and I can’t imagine saying no to going from a bottom three team to the heat of a pennant race. I suppose I get the family considerations – especially where, in Soriano’s case, he’s got two more years on his deal – but let’s get some things straight on that. As a baseball player, you spend only half of your year in the city where your team is based, and half of THAT time is actually spent all over the country on the road.

You’re going to play baseball only so long in your life: don’t you want to win while you do it?

Again, I don’t want to be mis-read here. Soriano can do what he wants, and I’m not going to criticize his choice. Still, I can’t help but voice my lack of understanding. Maybe there’s something I just don’t get.

This doesn’t mean Soriano can’t or won’t be dealt, mind you. But, to date, a deal with the Giants might have been the most realistic option. Maybe Soriano will change his mind, or maybe another team will pop up with a good offer. (Soriano says the Cubs have not approached him about any other possibilities since July 31.)

Or maybe the Cubs will keep Soriano, and revisit the issue in the offseason. He’s been productive, has improved his defense, and isn’t currently blocking any prospects. Keeping him in 2013 is still not a terrible idea.