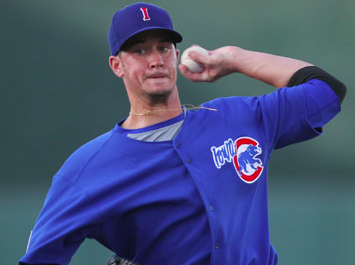 Another day, another rookie making his debut for the 2012 Cubs.

That’ll be the case tomorrow night when lefty Chris Rusin faces the Milwaukee Brewers. Dale Sveum earlier hinted that it was a possibility, but today the Cubs confirmed that Rusin would be called up to make tomorrow night’s start.

Rusin, 25, currently sports a 4.59 ERA and a 1.455 WHIP over 24 starts and 133.1 innings at AAA Iowa this year. Historically an impressive control-guy, Rusin’s walks have spiked this year to a 3.5 BB/9 rate, the worst in any of his three full minor league seasons. His Ks, unfortunately, have dipped at the same time, from a mark that was around 7 per 9 entering the year, and currently stand at just 5.9 per 9. He’s had an up and down season on the whole, at times dominating, and other times getting roughed up. Such is life in the PCL.

Rusin works on the slower side of the fastball spectrum, sitting in the high-80s/low-90s range. His success is predicated on keeping hitters off balance, and working in the zone. In some ways, he sounds a bit like a couple other lefties currently in the rotation (Travis Wood and Brooks Raley), though I’m not sure their approach is quite the same. His upside, like so many starters in the Cubs’ system, is that of a 4/5 starter. It was time to get him a look, and he’s got a shot at holding down a rotation spot next year, but that shot is rather slim.

Absent an injury or trade or someone getting bounced from the rotation (which seems unlikely), this is probably a one-off start for Rusin, as Brooks Raley is expected to remain in the rotation for now. Perhaps when/if the Cubs decide to end Jeff Samardzija’s season early, Rusin could get a few more starts. The alternative, of course, would be to go with a six-man rotation in September, which might not be the worst idea in the world, given what this September is going to be all about (evaluation).

The corresponding roster moves (25-man and 40-man) haven’t yet been announced, and almost certainly won’t be until tomorrow. Best bet is that someone of little interest is bounced from the 40-man, and a bullpen arm is temporarily demoted (after Rusin starts, that demoted bullpenner could be replaced by recently-claimed Alex Hinshaw, who will also need a spot opened up on the roster this week).