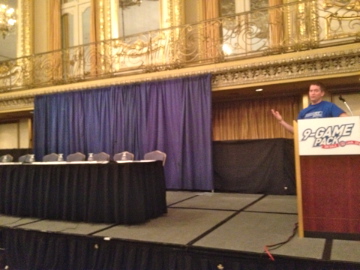 Yesterday, the Chicago Cubs released details on the 2013 Cubs Convention, and there are some changes. Most prominently, this year’s CubsCon will be held at the Sheraton Hotel & Towers, located just north of the river at 301 E. North Water Street. It will take place Friday, January 18 through Sunday, January 20.

Passes for the weekend are $60, but you can get them for $20 if you book a couple nights at the Sheraton. You can do that starting tomorrow at 9 am CT by calling 800-233-4100 and asking for the Cubs Convention rate of $179 per night. If you do it that way, you also get a bonus picture signed by Anthony Rizzo and Brett Jackson. The package last year also included a pair of bleacher tickets, but I guess that wasn’t a popular inclusion …

Barring some life-altering change of events, I will be at CubsCon again this year (though probably not on stage, as pictured upper right, onto which I “snuck” last year). For those attending, we’ll have to put together some kind of meet-up, probably that Friday night at or around the Sheraton. Start thinking of ideas for location/activities/etc., and put a big fat X on your calendar for that evening. You didn’t really have a date anyway.

Starting Wednesday, Sept. 19, at 9 a.m. CDT, Cubs fans can book rooms at the Sheraton Chicago Hotel & Towers by calling the hotel at 800-233-4100 and asking for the Cubs Convention rate of $179 per night plus tax. Guests who book a two-night stay will receive a limited-edition authenticated, autographed photo of Anthony Rizzo and Brett Jackson. Hotel guests may purchase up to four Cubs Convention passes for a reduced rate of $20 each. Individual Cubs Convention passes for guests not staying at the Sheraton Chicago Hotel & Towers will be sold for $60 per pass at a later date.

“We’re excited to offer our fans new experiences at the Sheraton Chicago Hotel & Towers for the 28th Annual Cubs Convention, as Cubs players, coaches, legends and executives come together to kick off the 2013 season,” said Wally Hayward, executive vice president, chief sales and marketing officer, Chicago Cubs. “The Cubs Convention is a great way for fans of all ages to gain access to the team, get excited for Spring Training and the season, and have fun in downtown Chicago with interactive exhibits, games and player panels.”