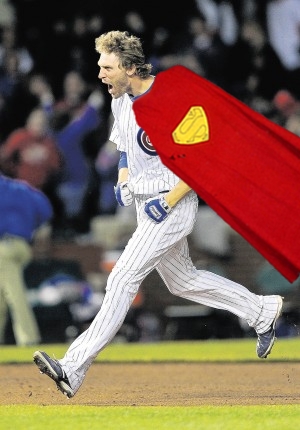 The roster purge has taken the Chicago Cubs’ 40-man roster down to 33 after today losing (dumping?) Chris Volstad to the Royals, and outrighting outfielder Joe Mather, and pitchers Justin Germano, Blake Parker (who was on the 60-day DL, and thus not technically on the 40-man), and Manny Corpas to AAA Iowa. The latter of the four had the option to refuse the assignment and elect free agency, an option he has apparently taken.

The other three head to Iowa, presumably hoping for a crack to come back to the bigs next year (and, frankly, there aren’t too many better teams out there on which to be a fringe Major Leaguer at AAA). Germano is decent depth as a 8th/9th starter type, but he fell off a cliff late in the year (his FIP was 4.11, for what it’s worth). Parker has decent stuff, but dealt with a stress reaction in his elbow in the second half. Mather … well, he can play many positions at Iowa next year if he’d like. (We’ll always have the Super Joe moment.)

As for Corpas, he proved that he was back from his Tommy John surgery, and had moments of effectiveness. I suppose I’m not surprised he was unwilling to accept a minor league assignment, but I would be surprised if he got a Major League deal next year. So, essentially, by declining to head to Iowa, all he’s really done is given himself more options for minor league deals to start 2013. Nothing wrong with that, and he may ultimately decide his best shot at getting back to the bigs is with the Cubs.

The Cubs have done just about what you’d expect in terms of opening up 40-man spots for the offseason (including Rule 5 Draft maneuvering), but they’ll need to do more. For one thing, three players – Arodys Vizcaino, Matt Garza, and Ian Stewart – are on the 60-day DL, so they don’t currently count against the 33 on the 40-man roster. For another thing, the Cubs will want to be, at a maximum, at 39 going into the Rule 5 Draft (otherwise they can’t make a pick if they’d like to). That would leave just 4/5 spots with which to add guys to protect from the Rule 5 Draft and any new players before early December. I’m thinking that we’ll see a few more names crossed off of the 40-man roster in the next couple weeks, but it may take some trading.