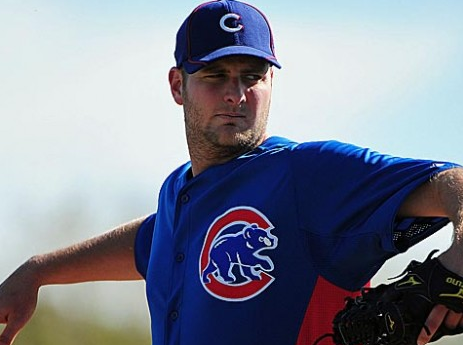 The Chicago Cubs’ moves on the big league roster in 2012 were a mixed bag. David DeJesus looks like a good sign, and Paul Maholm was a steal. Ian Stewart was a bust, though, and none of the cascade of waiver/scrap-heap pick-ups did much of anything.

And then there was Chris Volstad.

On the one hand, he didn’t do much of anything positive in 2012. On the other hand, he cost the Cubs Carlos Zambrano, a guy whom they had to dump anyway (and the Marlins were the only team biting, offering up a guy they were about to dump as well).

Given that background, it’s kind of hard to call the Volstad move a bust. It, like the moves that surrounded it, was kind of a mixed bag.

But that’s all over now, as the Cubs have waived Volstad, and he was picked up by the Kansas City Royals, undoubtedly intrigued by the promise of a tall righty with a sinker and a pedigree. That’s really all Volstad is at this point – besides young (26), I suppose – but you can’t really blame the Royals for taking a flyer. If they tender him a contract, he’ll cost them almost $3 million in 2013. That’s an expensive flyer, so you can’t really blame the Cubs for waiving him.

I’m sure the Cubs first asked Volstad if he would re-sign for an amount less than he figured to get in his second year of arbitration, and he must have declined. That, too, is understandable.

So, where does that leave us? If all of this reads like one big shrug of the shoulders, that’s probably by design. It’s hard to get too worked up about losing someone who so consistently didn’t show even a flash of the supposed promise. But the promise … she’s a good one. Maybe Volstad will finally put it together for the Royals. His advanced stats continue to suggest he’s mostly an unlucky guy who could be a decent number five in a big league rotation, just as they did last Winter when the Cubs picked him up.

We saw how that turned out.

Volstad was far from a lock for the 2013 rotation as it was, so his departure doesn’t really mean anything other than one fewer competitor for the back-end of the rotation in Spring Training.

(Yes, I know there were additional roster moves this afternoon – they’ll be getting their own post. Volstad deserved a separate discussion.)