It Could Be Worse: A Pirates Cautionary Tale Skip to content 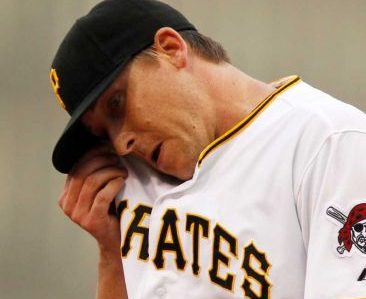 For years now, I’ve felt a sadness for Pittsburgh Pirates fans. Maybe even something close to a kinship.

How else could a Cubs fan feel about the poor fan base that hasn’t seen its team have a winning record in 20 years? It must be miserable for them, and kudos to those who stick it out. In Pittsburgh, the promise of “the future” and “prospects” have long been the one saving grace for baseball fans starved for even the thinnest sliver of success.

Of course, you don’t lose for 20 straight years without making some mistakes along the way. No, Pittsburgh doesn’t have the resources to quite keep up with the top spenders in baseball, but it’s not like the Central has been on a spending binge for two decades. The front office has made mistakes.

Even when it comes to those “prospects” – the ones the fan base has so patiently been waiting on. Dejan Kovacevic drops a bomb:

On Oct. 14 at 11:45 p.m., the Pirates’ minor-league coaches and instructors broke the midnight silence by banging on dorm rooms throughout the complex shouting, “It’s Hell Week! It’s Hell Week!” ….

On the “Hell Week” finale Friday, with a 10 a.m. road game on tap, the players again were awoken at 5 a.m. This time, it was to perform sliding drills on a still-dark field lit by a solitary quartz lamp. The coaches took turns manning second base and tried — not always successfully — to leap over players sliding into the bag, generally making a mess on the basepaths ….

I know about the above because I continue to hear from prospects worried about injury (some among the team’s most expensive draft picks), from parents who wish their sons had never signed with the Pirates, from angry agents, even from men who answer to Stark and GM Neal Huntington.

I’ll repeat: The Pirates’ development system is the laughingstock of baseball ….

[Top five prospect Gregory] Polanco’s ankle was sprained in mid-August, and it cost him most of his final month of play. But the Pirates still saw fit to have him participate in that first day with the SEALS last month, and as you might guess, the ankle was reinjured ….

I know this because I asked Polanco himself. Through an interpreter, he described it in vivid detail.

I know this because a pitcher in his drill group independently described it the same way.

But sadly, I wouldn’t have known this if I had relied solely on the Pirates’ word.

When I initially asked the team two weeks ago about Polanco, this was the emailed reply from baseball operations — no name assigned — through a team spokesman: “Polanco was NOT injured during that workout. He actually injured his ankle during the season. He opted out of those workouts, as he has continued to battle swelling but no pain.”

Oh my. That’s … bad. You should read the whole piece, as it provides more damning background and sad tales.

You never know for sure what’s going on behind closed doors, so it’s dangerous to cast aspersions, but I feel relatively confident that the Cubs aren’t pulling this crap (the risky exercises or the bald-faced-lie denials).

So, remember: even if all Cubs fans have upon which to hang their hats are “the future” and “prospects,” it could always be worse.

(Also: mad props to Kovacevic for going all out on this one. I’m sure it can’t be easy to so thoroughly castigate the very organization you cover for a living. And, no, I don’t mean in the feckless way Steve Rosenbloom does it.)