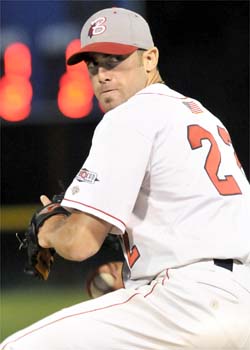 Penalver and Zych. I like the sound of those two names side by side. It sounds like a powerful law firm or a prestigious investment agency. If I were to be audited, I would want a firm with a name like Penalver and Zych handing my business with the IRS. Toss in a black silk suit and a handlebar mustache and I would have the most intimidating representation in town.

Welcome to another audit-free edition of Prospects’ Progress, the series in which we take a look at two prospects in the farm system and see how they progressed (or didn’t) over the course of the past year. As you have probably guessed by now, today the spotlight falls on infielder Carlos Penalver and reliever Tony Zych.

If case you’ve forgotten since Tuesday, Prospects’ Progress is not a top prospects list or player ranking system. All of that will be coming later in the winter.

Penalver made his professional debut in the Dominican Summer League in 2011. He did not have a great campaign, but he did walk 35 times against just 42 strikeouts, stole 21 bases in 29 attempts, and put together a very respectable OBP of .364. The young Venezuelan spent the vast majority of his time at shortstop, and at the end of the season was ranked third within the Cubs’ organization at that position by Baseball America. Only Marco Hernandez and Wes Darvill came in higher (Baez and Lake were listed at third).

Coming into the 2012 season all I really wanted to see was more of the same. If Penalver could keep playing shortstop, keep getting on base, stay active on the basebaths, and hold the strikeouts to a minimum, I would be content.

Penalver, at the age of 18, went to the Arizona Rookie League and hit .273/.341/.322. His walk rate was a quality 9.3%, and his strikeout rate was a very acceptable 15.1%. On defense he made 42 appearances at shortstop (second base was his second most frequent position at 5) and committed 14 errors. That error total looks high, but for a young shortstop that number is pretty meaningless. The important thing is that he was continuing to get steady work at the position. So, in three of the four areas I was watching, Penalver showed me exactly what I wanted to see.

And then we get to the fourth area. For some reason, Penalver attempted only eleven stolen bases all season. He was successful in 7 of those chances, but when a guy has a higher OBP than SLG, you don’t expect him to have the same number of steals as he has doubles. Players who do not have a lot of power need to make up for that in other areas, and base running is typically one of those areas. So far in his career Penalver has not shown much power at all. His career totals over 121 games and 516 trips to the plate are 1 HR, 3 3B, and 18 2B. He is listed at 6’0″ and 170 lbs; there is plenty of room for power to show up as he adds muscle over the next two or three seasons, but unless and until it does, his abilities on the base paths are likely to be a significant part of his offensive game.

Barring an injury, trade, or something else unforeseen, there is no room in Kane County for Penalver next season. He will likely open the year in extended spring training and move to Boise for the start of the Short-Season leagues in June. I expect he will be the regular shortstop for the Hawks, will continue to post quality numbers in the OBP, BB%, and K% categories, and will show more power than what he has demonstrated so far. I hope he rediscovers his baserunning game and turns in another 20+ steal season.

Long term, Penalver is blocked at shortstop for the Cubs by Starlin Castro, but it remains to be seen if he has enough of a bat to reach the majors anyway. If he can raise his SLG enough to become a .270/.340/.380 hitter then he probably has a career on the middle infield somewhere. We are years away from knowing that will be the case, though. Right now he is an interesting prospect that we will be keeping an eye on for the foreseeable future.

The Cubs took Zych in the 2011 draft, and was he immediately tagged by analysts as being very close to the majors. Zych is a right handed reliever with late inning potential. His fastball can flirt with triple digits, has some life to it, and is delivered via a somewhat jerky pitching motion that adds deception. From the day he signed he has been a fairly safe bet to reach the major leagues. In the 2012 season I was looking to see just how fast he could reach the majors, and if we could imagine him as a closer one day.

Zych could compete for a bullpen job in spring training, and I would not be at all surprised if he wins one. Should that happen, I would not be surprised if he is given a chance to close when/if Marmol is dealt during the year (or suffers another melt down). Zych is as legitimate a late inning arm as the Cubs have in the system today.

That’s not say Zych’s season was all great. He finished the year with a Double A WHIP of 1.541 thanks in no small part to his elevated walk totals. That is not such a good thing. Naturally, walks will be one of the things we are watching closely in the spring.

If Zych can keep the walks down, the velocity up, and the long balls non-existent, he could be an excellent closer. Thanks to its movement and his slightly unorthodox delivery, his fastball should continue to be an effective strikeout weapon as he climbs up the ladder. When he does arrive in Chicago I think the Cubs would prefer to start him out as a seventh inning guy and ease him into the late inning roles, but with a team this young and this much in flux, you never know what can happen. Regardless of where he begins 2013 (Tennessee, Iowa, or Chicago are the options), I think there is no doubt that he will finish the year in the Chicago bullpen. Should Rafael Dolis not claim the closer’s job in the post-Marmol era, Zych is more than capable of handling it himself.