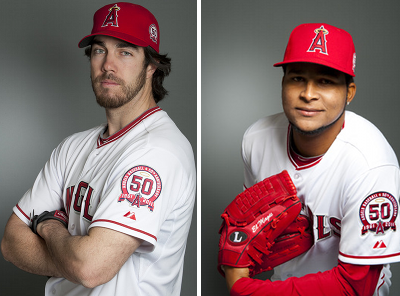 Earlier this week, reports had the Angels considering moving one or both of Ervin Santana and Dan Haren before the end of the week, ahead of their respective deadlines for picking up the 2013 option the Angels hold on each. I thought each, primarily Haren, might make an interesting target for the Cubs. The gist:

Dan Haren and Ervin Santana are set to be free agents in five days. Although each is controlled under a team option for 2013, those options – $15.5 million for Haren, $13 million for Santana – are expected to be declined given the down years for Santana (73 ERA+) and Haren (87 ERA+). Haren’s option includes a hefty $3.5 million buyout, so it’s possible that the Angels will decide he’s worth that $12 million difference and keep him ….

Before making that decision, however, the Angels are going to shop each pitcher, reports Jon Heyman ….

I think the Cubs should seriously consider feeling the Angels out on both pitchers.

Because those are exactly the kinds of deals the Cubs would love to sign pitchers to for 2013, but which free agents tend to hate – super short-term, high dollar amounts for one year. The Cubs are in a perfect position to absorb the cost associated with what amounts to a really expensive one-year deal for Haren and/or Santana – they have the money, and they have the desire to pick up flip-able pieces. And it’s not like these are worthless pitchers. Who knows what might happen in 2013 if the Cubs added one or both of them on the relative cheap?

From the sound of a report from Ken Rosenthal today, one or both of Santana and Haren is going to be dealt this week. Rosenthal says it would be an upset if no deal is made, and cites one executive who thinks both will be moved. The Angels are being agressive, and Rosenthal reports that the option decision on Haren is due on Friday, whereas it is due on Santana today.

So, are the Cubs among the teams actively in discussions with the Angels? Rosenthal doesn’t name names, but he does list teams “among the clubs seeking help for their rotations.” On that list, he has the Royals, Twins, Blue Jays, Padres, Red Sox and Brewers. Many more teams are looking for pitching – and arguably no team is a better fit for a one-year rebound candidate like Santana than the Cubs – so I wouldn’t read too much into the exclusion of the Cubs in that list.

Will anything happen today? Later this week? It sounds like it will. I know I’m suddenly watching the Angels’ option decision on Santana much more closely (assuming it is, indeed, today), and will be following the Haren story closely as well.