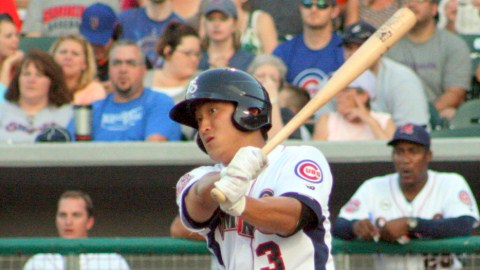 For today’s Prospects’ Progress I decided to give fans of the Iowa Cubs something to look forward to. With the exception of Anthony Rizzo‘s hitting clinic in the first half of last season, there has not been much to get excited about in Iowa. That is starting to change, though, as the better talent from the depths of the farm system is steadily filtering into Triple A. Brett Jackson and Josh Vitters are only the beginning. The truly elite talent won’t reach Iowa for quite some time yet, but today I’ll present two players that I think the fans are going to like a lot as soon as this summer.

Prospects’ Progress is not a player ranking system, a Top Prospects list, or anything of that nature. All I set out to do in this series is check in on the progress made by various players around the minor leagues. The rankings and lists are coming later this winter.

So, without further ado, here are Jae-Hoon Ha and Robert Whitenack.

Outfield defenders do not come much better than Ha. This is a guy who does not know how to give up on a fly ball. I like his speed, his anticipation, his angles, and his arm. His willingness to crash into walls is a little unnerving, particularly for a guy who hopes to play his home games in un-padded Wrigley, but at least we can safely say that Ha does not slack off with the glove. It would be very surprising if he does not quickly become a fan favorite when he reaches the majors.

If he reaches the majors. Ha’s glove is great, but a great glove is not enough to secure a major league job. Outfielders are expected to hit, and that is where Ha shows some concerns. Coming into the 2012 season his career best OBP was .334… and that was in Peoria. He had never walked at a better rate than 4.5%, had recorded more steals than caught stealings just once in his professional career, and had not shown much power at all. If Ha was to convince anyone he was ticketed for Wrigley, he needed to show some life at the plate.

The numbers strongly suggest that Ha is a very coachable player who is still improving. Since the day the new front office took over we have assumed that plate discipline and getting on base would be an area of emphasis in the minors, and Ha’s 2012 season lends evidence to that theory. In his first full season in Double A and as one of the younger players in that league, Ha raised his OBP to a career high .352 and his BB% all the way up to 9.5%. His 50 walks more than doubles his previous career high, and he did it in 11 fewer games. That’s exactly the kind of progress we needed to see.

He also improved his game on the base paths by stealing 11 bases in 16 tries. He stole 13 bags in 2011, but he was caught 17 times in the process. Again, 2012 marked significant improvement.

And it is a good thing his on-base and running games showed improvement, because his power game did not. After setting career highs in doubles and homers in 2011, Ha manged just six long balls all season. His SLG did tick solidly upwards towards the end of the season (.431 in July, .483 in August) suggesting that he was successful in making some adjustments, but that will still be an area of concern as he move up the minors.

When you put it altogether, though, Ha had a very nice season and finished with a wOBA of .346. If he can keep up that sort of production, he might just be a dark horse candidate to steal the center field job for the Cubs in 2014.

wOBA stands for weighted On Base Average. It combines a number of weighted statistics together to produce a single number that better reflects the total impact a player had on the team’s offense than batting average. If you read it as a better, more well rounded replacement for batting average, you won’t be too far off the mark. By comparison, Brett Jackson’s 2011 Double A wOBA was .371.

And he should move up. I expect Ha to pick up the majority of the starts in center field for the Iowa Cubs next season. If he can continue to get on base at a quality clip, he has real value as defensive minded center fielder who can work counts in the lower part of the order and cause trouble on the base paths ahead of the pitcher. Based on his 2012 improvements, I don’t think he will have much trouble finding work in the majors. He still looks more like a fourth outfielder than a regular starter to me, but if he can produce another high walk rate in Iowa I might be forced to upgrade that a notch.

Robert Whitenack was the surprise of the 2011 season. In a matter of weeks he jumped out of the pack of Cubs back of the rotation starting pitching prospects to stake his claim as a legitimate No 3 starter prospect. Not only was he rocketing up the minors, but a trip to Chicago was a real possibility.

And then his arm blew up. He had the surgery, ended his season, and over the winter all we could do was hope for the best. Instead of heralding his arrival from the minors, 2012 became an injury recovery season. Before he was injured, his knuckle-curve was considered by many to be the single nastiest pitch in the farm system. If he could come back healthy and with that pitch intact, he had the potential to be a 6’5″ mid-rotation work horse.

He came back somewhat ahead of schedule. The Cubs kept him on a tight pitch count in Daytona and limited him to just 51.1 innings, but the important thing is that he made it back. Unfortunately, we can’t learn a great deal from his numbers. For many pitchers, that first season after ligament replacement surgery is part of the recovery. They are still relearning their feel for their pitches, their feel for the strike zone, and slowly building up the injured elbow. Many of Whitenack’s number are particularly ugly (WHIP: 1.890, SO/BB: 1.15, H/9: 12.3, ERA: 5.96), and I am all but ignoring all of them. In a post-injury season, they just don’t mean anything to me.

There is one number I do want to call out, though, as being particularly positive. Whitenack finished the season with a GO/AO of 2.80. That is extremely high. In fact, that GO/AO being so high all but assures me that the knuckle-curve is still in his arsenal and that High-A hitters still haven’t figured out what to do with it. That is definitely good news.

For the time being, I still consider Whitenack as a safe bet to reach the majors with the ceiling of a No 3 starter. There is some additional risk here due to the elbow injury, but recoveries from that surgery are fairly reliable these days. I doubt his stuff will suffer any long term ill effects.

I am not sure where he will begin the season, although I suspect it will be in Tennessee, but by the end of the year, if he stays healthy, I expect to see him in Iowa. His groundball generating stuff will keep the Cubs’ infield on their toes, but it should translate well as he moves from one level to another. So long as his additional pitches are of sufficient quality to set-up his signature bit of nastiness, I don’t see Triple A hitters giving him much problem.

I doubt he reaches the majors in 2013, but I think there is a very good chance that he could be a factor in spring training in 2014. He has a lot of work to do before he gets there, but I have no trouble projecting Whitenack as a 200+ inning ground ball machine in the fourth starter slot for Chicago in the not too distant future.