So, the Marlins (Reportedly) Just Traded Everyone to the Blue Jays Skip to content 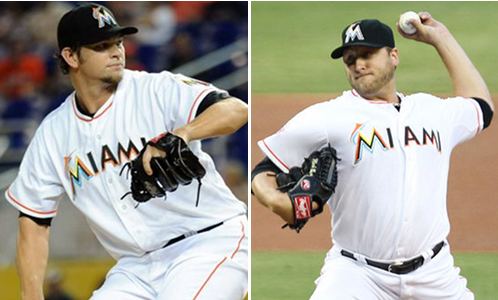 In a trade that will be discussed at length in the coming days in baseball circles (and, given its scope, probably around here, too), according to multiple reports, the Marlins just sent everyone – I don’t use that hyperbole lightly – to the Blue Jays for a variety of prospects, and a whole lot of salary relief.

The Blue Jays get Josh Johnson, Mark Buehrle, Jose Reyes, John Buck, and Emilio Bonifacio. They also get a modest $4 million in cash tossed in.

The money aspect is being sorted out, but you can expect that the Blue Jays are taking on most of the salary, given the prospect return (which is good, but not great). The Marlins clearly just wanted out from underneath the contracts of Buehrle and Reyes … they guys they signed last Winter. (Recall, they’ve already dumped Heath Bell.)

The implications of the deal for the Cubs are relatively simple: the deal takes the Blue Jays out of the trade market for a starting pitcher (like Matt Garza, for example), but it also takes them out of the market for middle tier free agent starting pitchers, which they’d been rumored to be pursuing. All in all, it’s a slight net win for the Cubs, but obviously a very small one.

The implications for MLB, obviously, are much greater. The immediate reaction has been, in large part: shame on the Marlins. They baited taxpayers into paying for a luxurious new stadium, bought a bunch of free agents on back-loaded deals that everyone knew they would eventually dump, couldn’t fill the stadium, and in just one year, indeed did the dumping. Because the stadium deal for Miami had already looked ugly, I don’t think it will be used as additional ammo against publicly-financed renovations to Wrigley Field (more than it would have been already, I mean). But it doesn’t help.

UPDATE: I should add that this deal hasn’t been confirmed by the teams yet, though (all jokes aside) it seems like a done deal … pending MLB’s reaction. I have a hard time seeing MLB shoot down a trade in the best interests of baseball, but this might come close, given the negative near-term impact it could have in Miami.