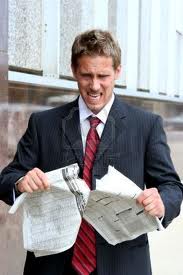 The frustration remains too fresh to offer much beyond some bulleted thoughts on the last 24 hours, but I wanted to give you something immediately, and in the moment …