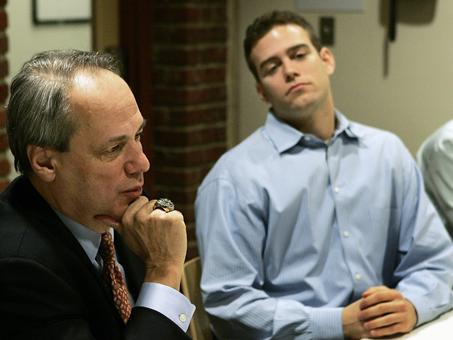 A disembodied quote attributed to Theo Epstein is making the rounds today (and was discussed in today’s episode of the BN Podcast), originating in former Boston Red Sox manager Terry Francona’s new book, which comes out later this month.

The quote, which focuses on Epstein’s last couple years as the general manager of the Red Sox, goes like this:

“They told us we didn’t have any marketable players, that we needed some sizzle. We need some sexy guys. Talk about the tail wagging the dog. This is like an absurdist comedy. We’d become too big. It was the farthest thing from what we set out to be.”

The “they” in the quote, of course, refers to higher-ups in the organization, including owner John Henry, chairman Tom Werner and president Larry Lucchino. The quote, if it is to be credited, explains that many of the decisions made in the last couple years of Epstein’s tenure were directed not by an appropriate baseball strategy – either near or long term – but instead by a desire for the franchise to generate attention and money.

Epstein is further quoted, saying that the “sexiness” directive was “evidence to me of the inherent tension between building a baseball operation the way I thought was best and the realities of being a big market … which had gotten bigger than any of us could handle.”

These quotes are fascinating not only because they appear to confirm the suspicions that many had about the Red Sox in those years, but also because they suggest that, as the Red Sox collapsed under their own ridiculous weight in the last three years, most of the blame for the absurdity rests with men above Epstein’s pay grade. It’s also nice to know that, coming into the Cubs’ situation, Epstein clearly wasn’t going to stand for ownership telling him he needed to go out and make splashy moves, even if it wasn’t in the best long-term interests of the organization.

I do wonder where these quotes come from, though. The write-ups about Francona’s book tend to tip-toe around claiming that Epstein offered these quotes for the purposes of the book. Instead, they obliquely refer to Epstein “being quoted as saying,” or things like that. It makes me wonder if these quotes are coming second hand, by way, perhaps, of Terry Francona. It’s very hard – impossible even – to imagine Epstein throwing his former compatriots and bosses under the bus like this, even if it’s right. It seems more likely that Epstein and Francona, who worked closely for years and who departed in the same tumultuous offseason after the 2011 season, had shared some private conversations about the direction of the organization (and why wouldn’t they? Francona probably needed to know why certain moves were being made). And now, perhaps, Francona is sharing those conversations.

I guess we’ll see when the book comes out on January 22.