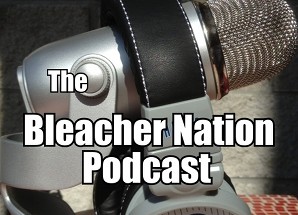 It’s the fifteenth episode of a super awesome podcast featuring me and Sahadev Sharma (and another guest!). You can listen to the podcast there below, or download it for later listening. You can also subscribe via iTunes. Here’s your iTunes link, and you can also find it by searching in the iTunes store. For those of you who use other feed-catching services, here’s the podcast feed. For those of you just tuning in who want to catch up on prior episodes, here’s the whole lot.

As always, you can send questions, comments, etc. to the official podcast email address (podcast AT bleachernation DOT com) if you want your thoughts included on a future show. Today’s email (alas, just one) hit on a very prescient topic: sleeper prospects.

And the question was prescient because the episode’s guest is the national prospect/player development writer at Baseball Prospectus, Jason Parks. You may know him more simply as “the really smart prospect dude at BP.” You may also know him as ProfessorParks on Twitter, and, if you don’t, you should give him a follow. He also used to do the wildly popular Up and In podcast with Kevin Goldstein, so he’s something of a titan in the field.

Jason was good enough to sit down with us for the better part of an hour to talk about all things Chicago Cubs prospects. We touch on how prospects are evaluated and ranked, the Baez/Almora debate, the value of a Logan Watkins, the future of Arodys Vizcaino’s arm, the future of Christian Villanueva’s bat, the young arms in the Cubs’ system, the possibility of a Cubs prospect rocketing up the rankings a la Oscar Tavares, developing prospects at certain positions, and much, much more.

Jason also expresses a deep fondness for Cincinnati chili and fedoras. Or the opposite of that. Sahadev and I hit on some of the latest news, Sahadev trolls TMZ, and we look back on the first 15 weeks of the podcast.