Bob Brenly Almost Stuck Around and Other Bullets Skip to content 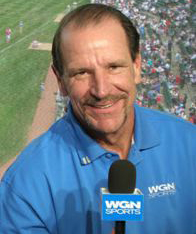 Chicago Cubs Owner and Chairman Tom Ricketts will address the team – now fully assembled – in Mesa this morning. Among the subjects: the progress on the Wrigley renovation front. Hopefully that means new information today, but it’s possible it will just be things we’ve already heard (not everyone is obsessing like we are). He’s expected to meet with the media, though, so I reckon they’ll ask some good questions. (Nudge: what’s the status of talks with the rooftops? Are you still considering the possibility of a plan to block them, or is something collaborative expected to come together? Frustrated by inability to get others on board to help? Will construction start in the Fall even if, for example, the night game plan hasn’t been implemented? How many night games do you want, by the way? JumboTron – anything new on that front? I could go on …. )