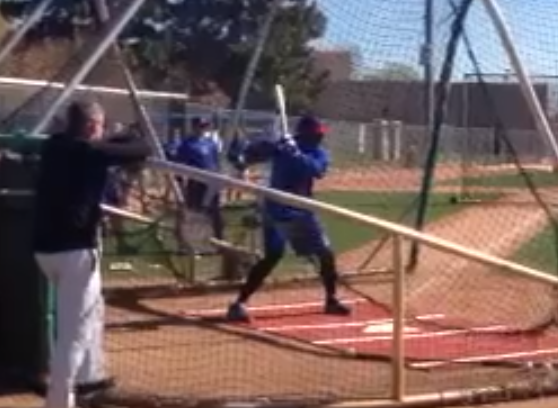 It was a given that, as one of the Chicago Cubs’ “big three” prospects, Jorge Soler was going to get a lot of attention when he arrived at Spring Training. Sure enough, when he started working out in Mesa yesterday, all eyes were on the huge physical specimen that is Mr. Soler.

Dale Sveum gushed over Soler’s batting practice, comparing his swing to a right-handed Cliff Floyd. Others noted how loudly the ball comes off of Soler’s bat. For his part, Soler says he expects to be in the Majors by next year, and the organization seems to believe he can start the year out at High-A Daytona with a chance to reach AA later this year. He hasn’t even turned 21 yet (that comes next week).

All in all, it was an impressive debut, though it’s obviously a very small slice of what’s to come for him. If he duplicates his minor league success again this year, then at this time in 2014, we can start dreaming on Soler patrolling right field at Wrigley.

And, once again, BN’er Eric is the dude of the day for passing on some batting practice video that he filmed – this time, it’s Soler’s explosive swing: