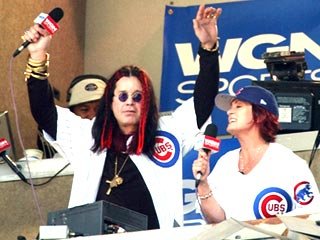 Since Harry Caray passed away, the singing of the Seventh Inning Stretch at Wrigley Field has been something of an annual controversy. For the most part, the Cubs have filled that time with celebrities, “celebrities,” former players, and people of whom we can make fun. Sometimes it’s great. Sometimes it’s awful. Usually the latter is more entertaining than the former, which is probably a bad sign.

In theory, things are going to be changing.

“I think we definitely want to focus on former Cubs players, people that are Chicago natives, people who know baseball and who are Cubs fans,” in-game programming director Jim Oboikowitch told Paul Sullivan. “I do think we want to get ‘A-listers,’ so if there is that celebrity in a movie …. But we want them to understand what they’re coming to do — not just come into the booth and say, ‘My movie hits theaters tonight,’ or ‘My book is in stores.’

“They should know something about the Cubs. They should know the background of Harry Caray and what we are doing, and I think it will be a little more teaching them and exposing them. We do want the best guests, so we might come across that situation. But I think it’s all about preparing them so they’re not on with [broadcasters Len Kasper and Jim Deshaies] and talking about stuff while a big home run is being hit in the bottom of the seventh.”

The latter point is a fair one. The singing and the brief intros of the “celebrities” have never bothered me. But when they get on the air for a half inning and they sound like total bozos, that’s no good for anybody.

Let’s hope that the solution is better guests, rather than artificial preparation. Ultimately, I don’t really have a passionate opinion either way about the guest conductor thing, but I know some folks do. So, if you want to rail, have at it.