The Reds Just Signed Mark Prior to a Minor League Deal, and We Say ... Good Luck?
Search
Skip to content 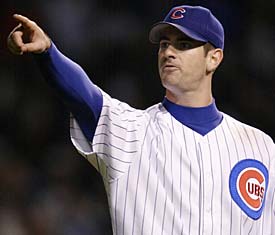 The lead everyone is likely to use on this one: some variation of Dusty Baker and Mark Prior reuniting. Fine. Write it up that way. If Prior manages to show he can still do a little work out of the bullpen, then, indeed, the two might reunite.

Of course, all that line of discussion does for me is bring up terrible memories about what might have been (which then leads to arguments about how much responsibility Dusty Baker should take for Prior’s arm deterioration), and about how many pitches Prior threw long after Game 2 of the 2003 NLCS was over (in the Cubs’ favor). Was he gassed a bit by the end of Game 6? Shouldn’t Dusty have gone out to settle him down …

Ugh. Never mind. I don’t want to go down that road.

So, anyway: the Reds have signed Prior to a minor league deal, and he’ll continue working hard to get a shot to return to the big leagues for the first time since 2006. Good luck to Prior, from a human perspective. I admire how hard he’s worked and long he’s tried to come back.

In terms of it being the Reds … well, I mean, I don’t expect the Cubs to be rivaling them for first place come August, but I still don’t particularly want to see a resurrected Mark Prior taking the ball on the bump at Wrigley Field while wearing a Reds jersey. Or maybe I do? I know I’d cheer for him. But I also know I’d have a nasty feeling in my stomach the whole time.

I hope he does well in his minor league outings, and I hope he earns a shot to return to the bigs. Beyond that, I’m not sure what I hope.

Good luck to him, I guess.