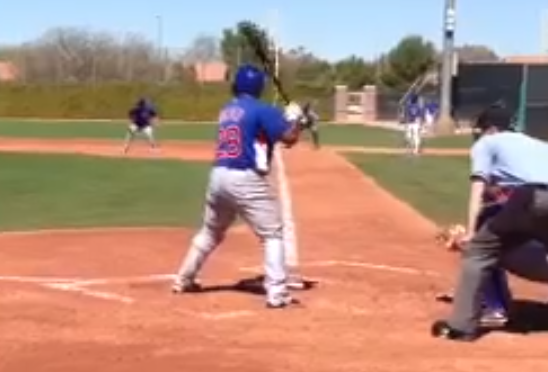 There was a time when outfielder Reggie Golden, the Chicago Cubs’ second round pick in 2010, was considered by some to be a top ten prospect in the system. And that time actually wasn’t that long ago – Keith Law had Golden in his top ten just last year. But an unfortunately-timed knee injury cost Golden his 2012 season, and he fell off the radar for most folks.

Well, he’s back in action, and BN’er Eric snapped some video of Golden – who is built like a truck (in a good way) – ripping a single in a minor league Spring game today:

While he was there, Eric (who is the man) also got some video of Dan Vogelbach looking relatively fit and trim, and showing off his swing on a single of his own: