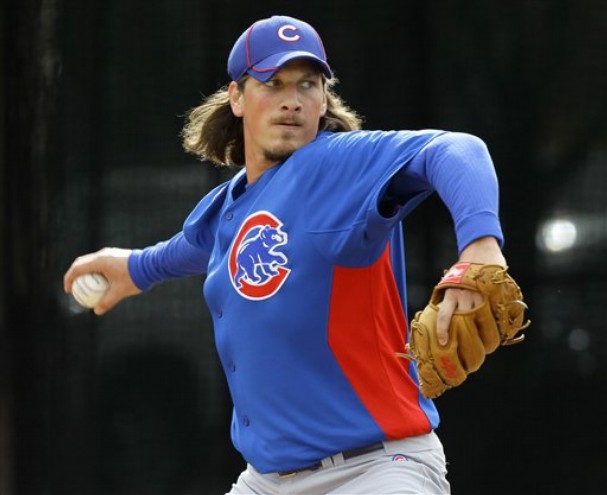 Extending Jeff Samardzija, who remains under team control through 2015, has been a regular discussion-point around here dating back to last August (see here, here, and here, for example). As a quality young-ish arm in an organization without many of them ready to pitch in the big leagues, the desire to keep Samardzija around for a long time is both obvious and understandable. The Cubs feel that way about Samardzija, and Samardzija wants to stick around, too. So the discussion is here to stay for a while – at least until something gets done.

Most recently, however, Samardzija indicated that the extension discussions weren’t going to go anywhere for a little while. From mid-February:

One issue with any extension talks, though, is that Samardzija, as a guy who got a big league deal out of the draft, has already made quite a bit of money in his career. The usual leverage a team has over a first-time arbitration-eligible player (i.e., that first big-time payday) doesn’t really exist for the Cubs.

So when Samardzija told the media earlier today that he wasn’t quite ready to sign a long-term deal with the Cubs this past Fall, you can understand why.

“We were talking, and we both have the same interests in mind,” Samardzija said, per Carrie Muskat. “We both want me to be here, and we want to be a part of this team for a long time. When we feel we’re on the same page with that, then we’ll get it done. That was offseason talk, that’s what happened at the end of the year.

“I still haven’t proven myself to where I want to be as a player. I was happy with last year but I don’t want to stay there, I want to improve and get better. I think the more I show them that, the more comfortable they’ll be with getting a deal done. [Contract discussions are] not even close to the front of the burner right now. It’s so far on the back, it’s history, to tell you the truth …. It doesn’t make much sense to sit down and try to negotiate anything out when I don’t have a full season under my belt,” he said. “Now we’re just talking potential.”

I read that as: the Cubs approached Samardzija about a long-term extension in the Fall, he wasn’t ready to sign a team-friendly deal (possibly because he doesn’t need the money, and can afford to take a chance on himself), and all sides agreed to keep talking as time goes on, with more serious discussions happening later this year.

But Jon Heyman reported this weekend that the Cubs and Samardzija were very far apart on extension talks, making it seem like the Cubs were still actively trying to get Samardzija locked down, and Samardzija was rebuffing them.

Heyman says the Cubs have “made two runs” at extending Samardzija, and suggests that the second effort came recently, with the Cubs offering “‘well above’ the nearly $30 million, five-year deal the Rangers gave Derek Holland last Spring.” Samardzija declined, according to Heyman, because he’s looking for a deal “in an entirely different ballpark.”

Samardzija, for his part, was surprised by Heyman’s report.

“Everything’s been the same from what I understand,” Samardzija told Carrie Muskat. “I haven’t heard anything since camp started and even before that, before the [Cubs] Convention [in January] …. We were under the assumption that in the offseason, we’d talk, nothing serious, we were just going to discuss things, but once Spring Training got going, they had things they needed to do and I needed to get ready for the year,” Samardzija said. “There really hasn’t been any talks.”

It’s possible that the Cubs floated a second extension idea to Samardzija agent within the last couple months, and his agent dismissed it out of hand, knowing that Samardzija wouldn’t agree to it. In that way, both Heyman and Samardzija could be correct.

Either way, it doesn’t really matter. The two sides will continue to discuss an extension when the time is right, and hopefully will find a way to meet in the middle. For me, for now, Matt Harrison’s five-year, $55 million extension with the Rangers looks like a pretty decent starting point for the Cubs’ discussions, as I’ve discussed before. But if Samardzija is confident in his ability, and feels financially secure, these extension talks might prove pretty difficult.