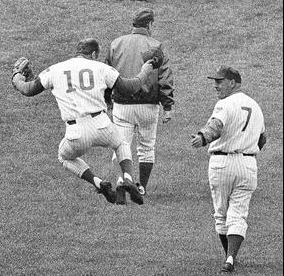 [Ed. – This is a guest post from BN’er Myles Phelps, a swell guy who writes about the Cubs from time to time (and you can find him on Twitter here). Myles wanted to share this idea with us, and it looked pretty fun/funny to me. This is the second part of his list, so drink in the first part if you haven’t already.]

Alright Cubs fans.  Let’s take a breath.  It’s been a rough week filled with tough injuries and vague threats to move Wrigley to Rosemont (side note: good luck dealing with my grandma if that happens, the Cubs.  Seriously, try telling an elderly woman that they’re moving her favorite pro sports team to a town that couldn’t even support a Bennigans).

We learned a lot on Monday.  And I think we all grew … together.  So let’s continue this bonding session: it’s time for Part 2 of the Chicago Cubs Top Surprises and Scandals series.

I was torn on whether or not to even throw this in.  But I had to, simply because, for the past seven years, it has been an important and frustrating part of the Cubs’ existence.  And the more I thought, the more importance I threw on it.

Listen, Sori’s personality has been great for this city.  People like him. Plain and simple.  Truth be told, he’s performed well at certain times and even had a comeback season in 2012.   That being said …

Jim Hendry gave him an 8 year, $136 million contract – the most expensive contract in Cubs history.  No personality is worth that. (For reference, the 2nd largest contract on the team currently is Starlin Castro’s recent deal of 7 years $60 million.)

When the contract was inked, Cubs Nation was excited.  They were hesitant, but excited.  They nabbed the best free agent available AND he had 40/40 capability (for those unfamiliar, that’s 40 home runs and 40 stolen bases in the same season.  Otherwise known as, “being very awesome”).  It was a huge deal.  But it was a risk – a risk that still haunts the Cubs financial books to this day [insert spooky Halloween music].

I don’t know if this is a scandal or a surprise.  But it’s definitely something.  I do like Soriano.  I really do.  But when you get paid, you have to produce.  And when you’re a GM and you’re paying, you have to make sure you’ll get production.

(For what it’s worth, Soriano has a clause in his contract requires him donate $25,000 every year to United Way and Cubs Care.  See?  Not a bad guy.  And for those who will say that’s chump change to him, yeah you’re right.  But he’s still doing it.)

“Mo money mo problems,” said Biggie Smalls that one time on that one song.

I wonder if Castro felt that way last year.

In January 2012, after a great sophomore stretch with the Cubs the previous season, Castro was accused of sexual assault by a young woman here in Chicago.  You know that other saying that “any press is good press … ”  What about this kind of press, guy/girl who made up that saying?

Shortly after, in April 2012, Casto’s name was cleared due to “insufficient evidence.”  This leads us to ask: did it happen?  Did it not?  Who knows.  Here’s what we do know: (1) the girl was wasted, as probably was Castro; (2) the girl likely knew who he was and what his status was as a professional athlete; and (3) no charges were filed.

Draw your own conclusions on this one. [Ed. – But do so cautiously!]

I’m going to get serious for a minute. Everyone loved Ron Santo.  Even if you didn’t, you still kind of did.  WGN’s radio broadcasts of Cubs games just don’t sound the same without him now.  Pat Hughes and Keith Moreland do a wonderful job, but Ron’s shoes are tough to fill.  With Ron, there was true anger on a boneheaded play.  There was pure jubilation on walk-offs.  There was a passion that he had that simply cannot and will not be matched.

Santo played 15 seasons in the MLB, 14 with the Cubs and 1 with the White Sox.  In that time he had an average of .277, won 5 Gold Gloves, and went to 9 All-Star games.  Most baseball historians and websites that track “all-time” statistics will tell you that Santo is ranked anywhere between the 6th and 10th best 3rd baseman of all time.  These are facts.  They are not the best.  They are, however, Hall of Fame worthy.

But that didn’t happen while he was alive.  No, it instead took over 30 years and his death to get him in.

And that’s a true scandal.

Alright, we’re off the serious train.  Well, sort of.  Because this next one is getting kind of serious.

The Ricketts vs. Alderman Tunney fiasco has been well-documented in the media, including this website.  There’s obviously a lot of moving parts, and most of it is all stuff you’ve read.  I thought this would be the right time to provide an extreme oversimplification of the entire ordeal using caveman lingo:

There you have it.  That pretty much says it all.  No other details needed.

Who knows when this will end.  But it’s getting pretty damn entertaining.  The only thing that would make this better is if they could make it some sort of MTV reality show like Real World.  We’d need a juicy love story and tons of sex though.

You guys remember the 1918 World Series?  It was a doozy!  Babe Ruth was in the starting rotation for Red Sox and the Cubs had none other than ace, Hippo Vaughn.  Remember him?  Ole Hippo?  According to his Wikipedia page, he got stabbed once.  What a badass.  Don’t remember?  Meh, anyway …

Here’s the thing: the Cubs may have intentionally thrown the series in favor of the Red Sox.

Some rumors floated around after the series, but, because World War I was underway, with U.S. involvement having begun by 1918, a lot of the rumors disappeared in the media.

What we do know is that during that time the players were treated terribly by the owners and were underpaid by most.  Some players alleged that they were not being given fair compensation based on the gate receipts from the games.  It was essentially more profitable for some to throw the game in favor of receiving a big pay day rather than win.  What would you do?

I wouldn’t do it because I’m not a dick.

Wait, where’s number 1?  I decided to do a classic cliffhanger here.  I learned from the best (R.L. Stein in Goosebumps).

Come back soon to find out what takes the cake.