Gauging the Farm Depth: Shortstop and Third Base Skip to content 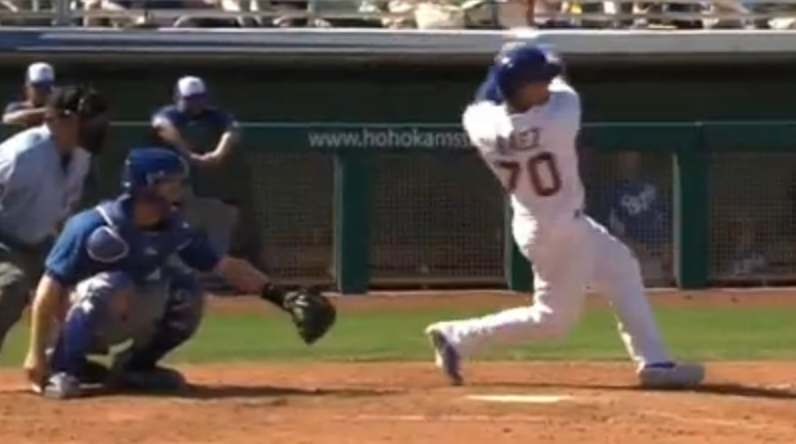 [The second in a series taking a high-level look at the Chicago Cubs’ farm system. First base and catcher were discussed yesterday.]

The farm system as a whole is very deep, but that depth is not evenly applied across all positions. Catcher is definitely on the thin side, as we saw in the last article, while first base features a good range of talent up and down the system.

Today we’ll take a look at the left side of the infield. I am lumping third base and shortstop together largely out of convenience. Many of the prospects at short are candidates to land at third if they cannot stick at short in the majors. And considering that the Cubs have one of the best young shortstops in the game already entrenched in Wrigley, odds are quite good that the Cubs’ best shortstop prospects will be looking for a new defensive home if they reach the majors on the North Side.

The headliner on the left side is definitely Javier Baez. He has the natural power and raw bat speed to hit for average and power and the defensive tools to be at least average at shortstop. The Cubs probably won’t move him to third until he is a few months away from the majors, but that could be as soon as sometime next year. If Baez can make some adjustments at the plate he has a chance to move quickly.

Jeimer Candelario may not be far behind Baez. Candelario may or may not be able to stay at third, but this switch hitter already exhibits plenty of discipline at the plate. There is no reason to give up on him at third yet, but there should be no worries about his bat working equally well at first.

The Cubs have a very good defensive third base prospect in Christian Villanueva, but it remains to be seen if Villanueva can hit enough stay at the hot corner. Moving to second may be an option for him, but, as we will see in a a later article, the Cubs are not exactly hurting for potential second basemen. Look for Villanueva to be the primary third baseman in Tennessee this year.

Joining him on the Smokies should be shortstop Arismendy Alcantara. Of all the raw, toolsy infielders the Cubs have packed into their farm system in recent years, Alcantara might be the rawest and toolsiest. Another switch hitter, Alcantara made some significant strides in Daytona last season. If he can build on those improvements he could find himself in the major league conversation in a couple of years. Some scouts feel he will be better suited for second base, but I expect he will stay with short for at least this season.

Speaking of switch hitters, we can’t forget about Marco Hernandez. Hernandez has a chance to be the best all-around shortstop not named Baez in the farm system, but he is still several years away. Look for Hernandez to return to the Midwest League to open the season.

Meanwhile, Junior Lake will be in Iowa spending more time at third and in the outfield than is typical for the career shortstop. Lake can handle short, when his head is in the game anyway, but he is close to the majors and is effectively blocked by Castro.

Also deserving some mention are projects Wes Darvill, Dustin Geiger, and Carlos Penalver. All three are young, raw, and with limited experience, but there is potential for any or all of these three to develop into major league talent.

And if we look into the very lowest levels of the organization, the Dominican Summer League, we find Mark Malave and Frandy de la Rosa quietly working on earning their own trip to the States. It will be awhile before we know what the Cubs have in those two, but both were highly regarded signings

Finally, to top things off, the Cubs drafted a pair of infielders in the middle rounds of the draft that have so far outperformed expectations. Tim Saunders and Stephen Bruno look more like second basemen long-term, but don’t be surprised to see both of them pick up playing time all over the diamond this season. They also have a chance to move quickly. I would not be surprised to see one or both finish the season in Double A.

That’s a lot of talent. This is the kind of depth that gives the Cubs a lot of options in terms of trades as well as options for the major league roster in the nearish and more distant future.