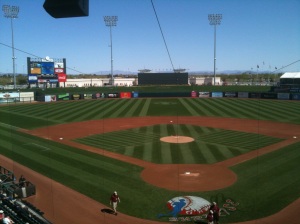 It’s another night game for the Cubs, who’ve got just two left in the Cactus League. You can catch this one on MLB.tv, or on MLB Network on a delay … at 2am. Sleep is for idiots.

It’s Scott Feldman’s turn to tune up for the season, and he’ll go just 50 pitches or so. He’s had a rough Spring, but hopefully, by September (or at least July … ) he’ll end up being one of those guys you cite when talking about how worthless Spring Training stats are.

The lineup (which previously featured Starlin Castro, who was scratched because he’s headed out to be with his girlfriend, who is expecting their first child):