Can the Chicago Cubs Get a Sure-Fire Stud College Arm with Their Number Two Draft Pick? Skip to content 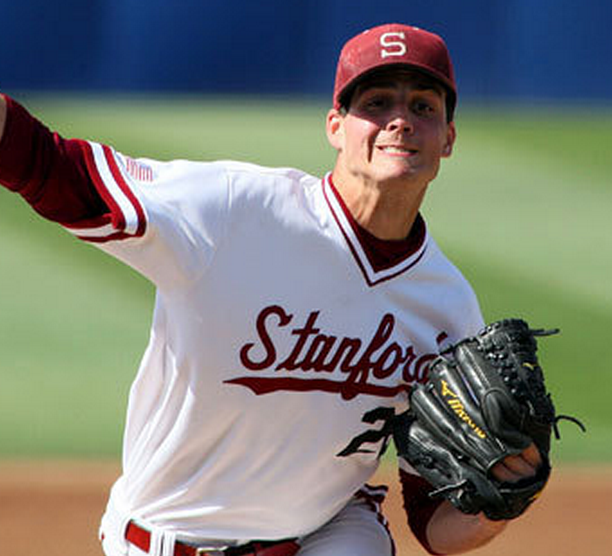 For a while now, based on comments by virtually every member of the Chicago Cubs’ front office, the strategy for the number two pick in the June draft has been clear: if there’s a sure-fire, can’t-miss-stud college arm available at number two, the Cubs will take him. If not, they’ll take the best position player on their board. The latter group is likely to include high school outfielders Austin Meadow and Clint Frazier, and possibly college bat Kris Bryant.

But what about the former group? Who are the college pitchers that could be so overwhelmingly good – and relatively safe (relative is the key modifier there) – that the Cubs might consider going for a pitcher? Well, I think you probably already know the names – Stanford righty Mark Appel, Indiana State lefty Sean Manaea, and Oklahoma righty Jonathan Gray (a living example, by the way, of why I don’t speculate on the draft until the amateur season actually starts – Gray was not a possible top two pick on anyone’s board until the last month; this happens every year).

Are any of those three going to be good enough, sure enough, for the Cubs to pull the trigger?

Well, the good news, if you’re hoping the Cubs draft a college arm, is that Keith Law says there are now two clear top-tier college arms in the draft – Appel and Gray. Since the Cubs pick second, that means they’re guaranteed to get one, if they want.

“I think Gray is the alternative to Appel at 1-1 right now,” Law said in a recent chat (h/t to BN’er Coop). “Cubs fans should be most excited about Gray, because his emergence would mean, today, that they are guaranteed to get a top-tier college starter who projects as at least a good #2.”

There’s still a ways to go until the draft, but the emergence of another top college arm is good news for the Cubs. Pitching options in the draft would be a good thing, even as the organization recognizes that draft to a need is almost always a mistake. Of course, in this instance, Appel, for example, is believed to be ready to contribute at the big league level as soon as 2014. The Cubs could obviously use that.

As for the front office, they’re sticking to their story, with Scouting and Player Development Chief Jason McLeod telling Patrick Mooney that the organization still sees positional players as slightly less risky at the top of the draft.

“If we go that route [selecting a pitcher at number two], hopefully our guy turns into that [Justin Verlander] kind of guy. But if you look back at the draft, you’ll also see a lot of guys that went 1, 2, 3 that were pitchers and kind of just had mediocre careers. So pitching comes from everywhere. Typically, [with] your position players, the star guys come at the top of the draft.”

McLeod added that the organization has spent a lot of time following Appel this year, and “we will continue to.” Mooney says that Theo Epstein recently scouted Gray, himself.