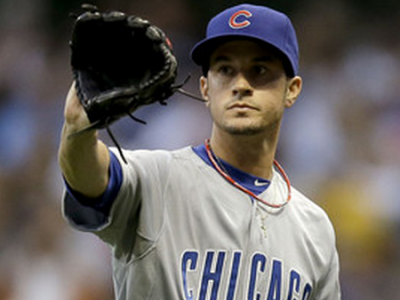 [The final installment in a series looking at the depth within the Chicago Cubs’ farm system. Luke previously looked at catcher and first base here, shortstop and third base here, second base here, and outfield here.]

To greatly over summarize the rest of this series: when it comes to hitters, the Cubs are in pretty decent shape.

The same cannot be said about their organizational depth at pitching… yet. But I think that tide is definitely turning.

There is only one high ceiling pitcher in the upper levels of the system: Arodys Vizcaino. If he comes off his arm surgery at full strength, the Cubs might have a No. 2 starter. Should he continue to lack durability in his post-surgery career, the Cubs have an excellent candidate to lock down the back of the bullpen. Either way, Vizcaino is likely to provide the Cubs with a quality pitcher in a key role as soon as later this season.

But the next best group of arms are in A ball. Pierce Johnson, Duane Underwood, Dillon Maples, and Paul Blackburn all have the potential to emerge as No. 2 or 3 starters one day, but with the exception of Johnson (who could start the season in Daytona) they all project to begin 2013 in Arizona, Boise, or Kane County. Juan Carlos Paniagua could begin his Cubs career in Daytona or Tennessee, but first he has to get into the country. He may yet emerge as a potential impact starting pitcher, but his late start to spring training means it will be some time yet before we know just what his potential is.

There are some very nice relievers in the upper levels of the system. Rafael Dolis has the stuff to be a closer, if he can learn to harness it. Trey McNutt features two plus pitches and has had success out of the bullpen. With a deceptive deliver and plenty of late inning experience, Tony Zych might be one of the best candidates to emerge as a future closer for the Cubs. If he can harness his control issues, Kevin Rhoderick looks like a quality middle reliever in the making, as does Lendy Castillo (although Castillo is quite a bit further away). Frank Batista, despite a lack of superior stuff, has enjoyed success as a closer at near every stop he has made in the minors. All of these pitchers are likely to be in Double A or Triple A this year, and any of them could be called to the majors if the Cubs need someone to fill in for a few weeks.

While the farm system lacks potential front of the rotation starters in the upper parts of the farm system, there are some solid candidates to fill in the middle and back end of a starting five. Eric Jokisch, still one of the better lefty starters in the farm system, should be in Iowa this year. He could be joined by some combination of Alberto Cabrera, Barret Loux, Nick Struck, Chris Rusin, and Brooks Raley (there are a handful of other candidates as well). A little lower in the system we should find Ben Wells, Matt Loosen, Austin Reed, Austin Kirk, Dallas Beeler, Michael Jensen, and Robert Whitenack (who has been suffering from a troubling lack of velocity since his elbow surgery). That should be more than sufficient depth to produce a good crop of quality fourth and fifth starter candidates for the Cubs. The rotation battles next spring could be pretty interesting.

Depth on the mound really is not a problem if we look at the entire system. There is a severe lack of elite pitching, but, on the whole, there are a lot of players who have a chance to make a positive impact in the majors. I’ve already dropped a lot of names in this article, and I haven’t gotten to Tayler Scott, Anthony Prieto, P.J. Francescon, Frank del Valle, Starling Peralta, Jeffry Antigua, or Ryan McNeil. All of these guys have shown at least flashes of potential in the low minors, and some of them quite a bit more than flashes.

With this many pitching prospects, I honestly think a few will break out and elevate themselves from potential No. 4/5 starters to No. 3s, or maybe even No. 2s. The Cubs are doing everything they can to help that happen; signing Derek Johnson away from Vanderbilt might turn out to be the best move the team made this winter.

And that’s the farm system. There is some great talent and depth around the infield, great talent and promising athletes in the outfield, some potential and a lot of decent depth on the mound, and not much of anything behind the plate. On the whole, this system is moving up. After another round of deadline trades and another draft that is likely to be heavy on pitching, I suspect we’ll find an overall deeper system with fewer weaknesses next year.