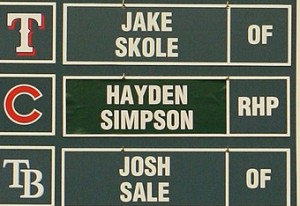 One of the more bummer-inducing stories in recent years, Simpson was supposed to be the Cubs’ diamond-in-the-rough pick that year, when they went off the board for a D-II pitcher they’d quietly scouted, and seen throwing in the high-90s. He came to the Cubs, got a vicious case of mono, lost 25 pounds, lost 10 MPH off his fastball, didn’t pitch for almost a year after he signed, didn’t pitch well, maybe hurt his arm, and never had “it” ever again.

The writing has been on the wall for Simpson for quite some time now, even as the Cubs gave him every opportunity to re-establish himself. It’s a sunk cost, but sometimes you’ve just got to let a guy go. Best of luck to him, and hopefully he invested that signing bonus.

The Cubs also released Dontrelle Willis, whom they brought in this year on a minor league deal. The former Cubs prospect, who found success with the Marlins before a variety of issues derailed his career, may end up retiring once again, as he did last Summer. Like Simpson, he simply lost “it.”

Surprisingly, the Cubs released minor league catcher Michael Brenly – the son of former broadcaster Bob Brenly (and, no, I don’t see any connection between Brenly’s departure and his son’s release) – who had the look of, at a minimum, an organizational catcher for the next few years. He had the upside of a big league backup if everything broke right, but I guess the Cubs didn’t see it. There’s a serious dearth of catching bodies – not talent, just bodies – at the upper levels of the minors, so we’ll see if there is any corresponding movement (especially if Steve Clevenger is on the bench for the big team). The Cubs did pick up 26-year-old catcher Jair Fernandez this offseason.