Let's Talk About that Ryan Sweeney Signing: Does it Forecast a Trade? Skip to content 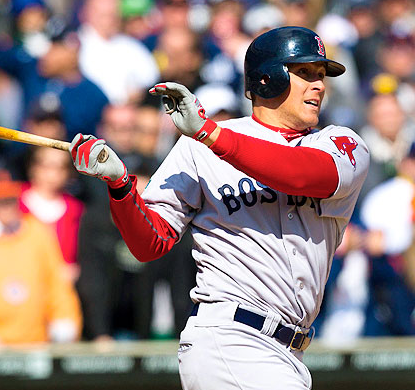 Not that I make it a practice to obsessively pore over every minor Chicago Cubs move (winky face), but I’ve been running around this Ryan Sweeney signing in my head for the past day.

Yesterday, the Chicago Cubs inked 28-year-old outfielder Ryan Sweeney to a minor league deal after he was dumped by the Red Sox in favor of uber-prospect Jackie Bradley, Jr. A lefty with offensive upside who can adequately cover all three outfield positions, I’d think Sweeney would have been one of the more-pursued fourth outfield candidates back when he became a free agent after being non-tendered by the Red Sox last November. He wasn’t, however, because he quickly re-signed with the Red Sox, seeing some outfield opportunities.

After Bradley’s emergence, Sweeney saw that he was going to be somewhere in the 6th outfielder range on the roster, and asked for his release rather than be sent to the minors. There are teams across baseball that could use a fourth or fifth outfielder like Sweeney, so it was the logical move. And, after becoming a free agent once again, Sweeney signed with a team that has … as many as five outfielders ahead of him on the roster.

Obviously we don’t know what other teams were interested in Sweeney, though he told the Cedar Rapids Gazette that there were at least a few teams. So why would he settle on the Cubs?

Don’t get me wrong: I thought Sweeney made sense for the Cubs all along. With platoons in center field and right field, a lack of quality depth at AAA, and the possibility of trades, the Cubs could definitely use someone like Sweeney. And no-risk upside plays are always nice.

What I’m questioning is why the Cubs make sense for Sweeney. Is it simply a matter of him playing the odds that an outfield trade or two is coming by midseason? Maybe. Does he simply think he’s better than Dave Sappelt, and believes he can prove it at Iowa in short order? Maybe.

But I wonder what those phone calls with Theo Epstein, with whom Sweeney says he spoke before signing, sounded like. I wonder what recruiting pitch Epstein used, given the five outfielders already on his big league roster. When you’re selling a big league caliber player on a minor league deal, your primary selling point is the possibility of cracking the big league roster. How exactly did Epstein frame that to Sweeney, and what might it tell us about the organization’s plans?

I think it’s pretty clear that the Cubs are now in a much better position to deal Alfonso Soriano or David DeJesus without having to rush Brett Jackson. Sweeney won’t replace either player’s production, but he’s a far superior overall option than a Brian Bogusevic or Darnell McDonald. Would Epstein hint at such a thing? Or would he simply fall back on the old, “Well, Ryan, injuries happen, and you’d be the first guy we’d call up”?

We’ll probably never know, but it’s safe to say that the Cubs are in a much better position to make an outfield move today than they were yesterday. And that’s no accident.

Sweeney appears to be a Moneyball player through and through, and a guy that any smart team would want to find space for. The offensive line – .280/.338/.378 – for his career doesn’t wow you, but he does everything well at the periphery. First of all, he’s a lefty who hits righties well, making him a cheap, ideal platoon candidate. His career line against righties is .293/.347/.402, which is actually markedly better than Nate Schierholtz’s line against righties (.266/.321/.414). (And you can probably throw out ballpark effects, given that Sweeney spent most of his time in spacious Oakland, while Schierholtz’s power was dying in San Francisco.)

He walks at a league-average rate, and strikes out slightly less than league average. He plays average-to-above-average defense in all three outfield positions.

And Sweeney sees a huge number of pitches. If he had enough plate appearances to qualify, his 4.33 pitches per plate appearance over the last two seasons would place him third in all of baseball.

Sweeney’s 2012 season was both disappointing and embarrassing, as his numbers were down and he broke his hand in July after punching a door in frustration. But Red Sox GM Ben Cherington says Sweeney was actually hot to start the year before playing through an unspecified injury drove his numbers down.

Taking it all in, you get the picture of a guy for whom some team should have wanted to find a big league roster spot. A smart team can see that this is a guy who, as a platoon outfielder or a bench guy, makes your team better. And yet he had to settle for a minor league deal with the Chicago Cubs.