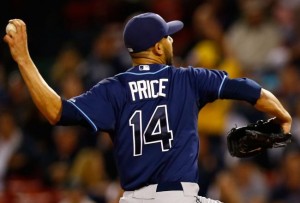 It’s early – so, so, so very early – but we’ve already seen a great many folks connecting David Price to the Chicago Cubs. That would be the same David Price who isn’t a free agent for another couple years, and pitches for a team with playoff aspirations. Remember these things before you get too excited about the possibility of Price in a Cubs uniform any time soon.

But, given the Rays’ modest budget and Price’s escalating salary – to say nothing of their previous penchant for trading stars like Price as they approach free agency – it’s fair to project that they’ll move Price in the offseason, if not sooner. Price, 27, makes more than $10 million this year, and has two more pricey arbitration years left. If moved after this season, the Rays could stand to pick up a ton of quality – cost-controlled – young players in return.

So, if the Rays do end up moving Price, where might he wind up?

Well, offering an early, educated guess, Buster Olney has the Cubs at the top of his list of Price landing spots, on top of the Red Sox, Cardinals and Rangers. So much can happen between now and the time Price is actually traded, but it certainly makes sense. The Cubs will need a top of the rotation starter soon, and they could have a glut of positional prospects to trade by the end of this season. With top players increasingly attainable only by trade or internal development, it’s very easy to see the Cubs going hard after Price. Of course, so will many teams.

To that end, if you hope the Cubs land Price, you also need to hope that the Cubs’ top prospects continue to develop this year, and few explode out of nowhere. The price on Price is going to be extreme, and it would necessarily have to start with someone like Javier Baez, Jorge Soler, or Albert Almora.

(Here’s where you allow yourself a moment – just a moment – to drool about the possibility of a 2014 rotation that includes David Price, Jeff Samardzija, Matt Garza, Edwin Jackson, and Mark Appel. Ok. Enough of that.)