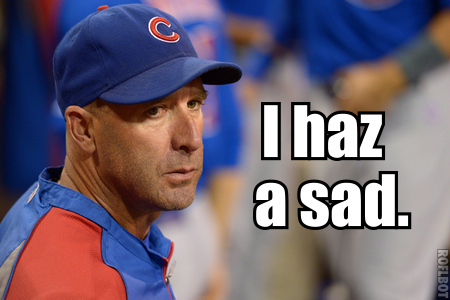 On the back of an ugly 5-13 start to the season and a handful of losses that could have been avoided if not for some fundamental lapses, it’s understandable that Chicago Cubs manager Dale Sveum would be receiving some heat (even if that heat is irrational). And when Sveum, himself, starts talking about job security, it opens the floodgates for the “fire the manager” discussion.

Don’t read that line as a criticism of the media, mind you. As I said, it’s an understandable topic, and Sveum brought it on himself by saying things like, “we’re all [accountable] in this. I’m [not] exempt [from] being fired, so is my coaching staff. We’re all in this together as a team.” And things like, ““I’d be lying if [I said] you didn’t think about [your job] through some of this stuff, too.”

So, we talk about it. Is it reasonable for Sveum to be worried about losing his job at this point? It’s an easy no, right?

The Cubs’ struggles this year were pre-ordained by a roster that never looked like a .500 team, let alone a playoff contender. No amount of managerial massaging – even if you subscribe to the school of thought that says the quality of a manager can account for as many as five to eight wins per year (seems extreme to me) – was going to make this team competitive. Take it up with Theo Epstein and Jed Hoyer if you’ve got a beef about that. (I don’t.)

That all said, simply because we don’t expect the Cubs to be a winning team does not mean Sveum and his staff are above evaluation. If the players seem unmotivated, are underperforming in surprising ways, are playing decidedly un-fundamental baseball, are getting into fights, and are expressing a general lack of desire or interest in playing the game, then you could start to wonder about Sveum’s fit for the organization. Further, if Sveum’s in-game tactical decisions were repeatedly head-scratchers that cost the Cubs games, I think you could make a case for firing, too.

But, to me, we simply aren’t there yet. We’re not even that close.

For one thing, I’ve generally found Sveum’s game management to be excellent. After years of Dusty Baker, Lou Piniella and Mike Quade, maybe my standards for lineups, bullpen usage, substitutions and shifts were unreasonably low. But it’s hard to argue that, as an in-game manager, Sveum doesn’t blow those three guys out of the water.

As for the fundamental and defensive lapses, eventually, some of that will fall on the coaching staff. It’s always going to have a personnel component, and Sveum can’t do much about that. But we’ll see how the fundamentals issue plays out over the next few months.

As for the peripheral and off-the-field stuff, I don’t have any reason to cast aspersions. The players all seem to have a good attitude, and seem to be approaching the game the right way.

All in all, I’ve got to believe that Sveum is still the guy that Theo and Jed wanted in place for this transition period, and there’s no reason to dump him just yet.